Who Said Coronavirus Is a Damper? Brands Ride On Creativity To Go Bullish

“Stopping advertising to save money is like stopping your watch to save time.”

Lockdown or no, the show must go on. That’s the principle India Inc has embraced during this nationwide shutdown to stem the spread of COVID-19. The bazaars are shuttered, as are most factories, and shoppers have been sequestered for nearly two months. So how are brands winning people’s hearts when everyone is worried about their lungs? The answer is creativity, as David Ogilvy professed long before the pandemic changed the rules of the game: “If it doesn’t sell, it isn’t creative.”

Take Unilever’s Surf Excel campaign #DaagGharPeRahenge. The advert created using stills and the narration of seven-year-old Grishma Mohan motivates kids to stay at home with a message they can grasp: The swing, the bicycle, the playground will wait for us—if we just stay at home for a few days.

Prabha Pandey, mother of a six-year-old, says, “My daughter has been insisting on going to school and the playground. Such advertisements help convince kids..” Although she is not on Instagram, where Surf Excel is primarily running the campaign, she feels such advertisements can give pointers to parents on how to explain things to kids. “Like in the video, I tell my daughter that the swing is tired and needs rest, which she understands,” says Prabha.

Such ads remind us of American futurist Alvin Toffler’s words: “The illiterate of the 21st century will not be those who cannot read and write, but those who cannot learn, unlearn, and relearn.” Reckitt Benckiser’s Dettol, for instance, is a household product, with tremendous recall and goodwill value. But it too needs a push in this age of hand sanitisers, soaps and bleach. So it unleashed a social media campaign with one of the most viral platforms in the market, TikTok. Its #HandWashChallenge campaign has got over 93 million views so far, many from tier-II and tier-III cities. 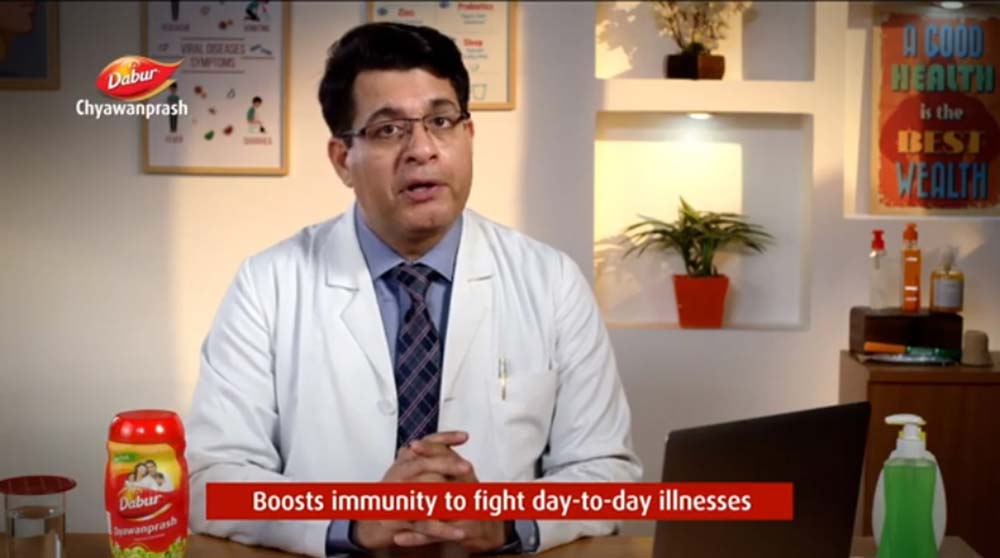 Pankaj Duhan, marketing director, Reckitt Benckiser, South Asia, Health, says, “When the pandemic struck, it changed a lot of things for consumers and governments. Since there is no vaccination and preventive measures are the first line of defence, Dettol, being the most trusted brand, had all the more responsibility.”

Dettol created ads with celebrities like Lara Dutta and Shikhar Dhawan about the importance of washing hands.

He explains that Dettol launched the campaign with three milestones. The first was to educate people to clean their hands with soap or hand sanitiser. Second, show the right way to wash hands and third, the right duration, that is, 20 seconds. “With these objectives in mind, we created many commercials by partnering with popular celebrities,” says Duhan. Lara Dutta, Shikhar Dhawan and Neha Dhupia were some of the stars who washed their hands with Dettol soap for the video. He adds that the celebrities themselves shot their clips and their videos were edited together to make a commercial, thereby ensuring that social distancing and other lockdown guidelines were followed.

Reckitt Benckiser also made commercials for products like Moov—working from home might give you aches and the company espoused the use of Moov along with yoga and exercise. Unilever, a brand with a wide range of hygiene products, also changed its advertising strategy. The company engaged several celebrities, including rapper Badshah, for its #LifebuoyKarona campaign and other promotions.

A creative director, on condition of anonymity, says, “The pandemic changed a lot of things. The advertising industry was also not immune, but they have to be applauded for coming out with such creative ideas despite the challenges. In the past month, almost no advertisements were shot and yet there is a lot of variety.” Shooting videos without directors and actors shooting themselves without professional DoPs are some of the changes the industry had to embrace. “But most surprising was corporates coming up with responsible campaigns,” he says. 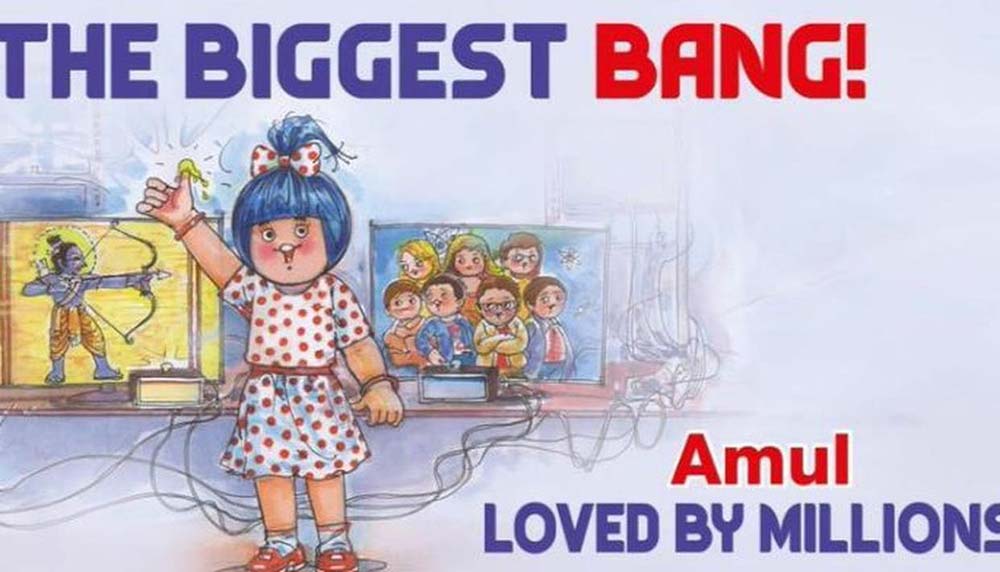 During the first phase of the lockdown, e-commerce giant Flipkart started a campaign called 21 Days of Safe Living. It gave one activity every day to people to help them beat the lockdown blues. Sample activity 12/21: ‘Hiding a talent? Record and share a video with your gang.’ Activity 13/21 recommends soaking sunshine for at least 20 minutes to get Vitamin D. Durex put out an advert urging people to “come inside”, a cheeky way of asking people to stay at home during the lockdown.

Dairy producer Amul is known for its quirky billboard advertisements. After Doordarshan announced that Ramayan and Mahabharat would be broadcast again, Amul’s marketing team tuned into the commercials of that era. Its old ads were a rage on social media; they made people nostalgic and ignited conversations. Amul also dedicated its new doodle to the success of Ramayan, which recorded an unprecedented 7.7 crore viewers on the night of April 16.

Amul MD R.S. Sodhi says, “We have always resonated with the emotions of our customers and listened to their feedback. Recently, when everyone was enjoying Ramayan and Mahabharat on Doordarshan, we received many requests to showcase our vintage ads from the eighties and nineties, so we decided to air our Amul Classic collection of ads featuring the first ad for our butter, chocolate and milk among others. This initiative resonated strongly with our consumers who grew up with the brand over the past 60+ years”

In a social media post, communications consultant Karthik Srinivasan writes, “Any brand that used to advertise during the first airing of Ramayan or Mahabharat on Doordarshan in the late 80s and 90s could have gone on this nostalgic trip using nothing but its advertising archives. This includes many brands like Bajaj, Vicco, Dabur Chyawanprash etc. But it took an Amul to pull it off first.” 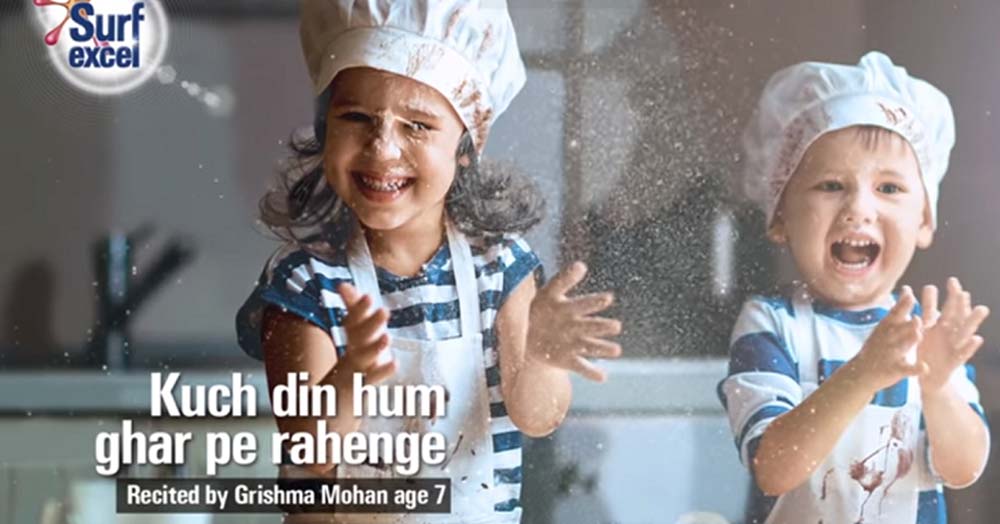 According to market experts, advertising demand is decreasing, except for categories like essentials, health and hygiene.

“Forging partnerships for social campaigns between brands could have sent a strong message, but there was no such effort, which is a bit disappointing. Brands banding together in such testing times makes a strong statement to the public,” says the creative director who doesn’t wish to be named. Several corporates are now looking forward to collaborations since the pandemic is a long-term scenario rather than a short journey, he adds.

According to market experts, advertising demand is decreasing, except for categories like essentials, health and hygiene. Industries are responding differently. While advertisements for travel agencies, hotels and restaurants are next to negligible, essential commodities have taken over TV screens, newspapers and magazines. Most companies are slashing their advertising expenditures, while some brands are doubling it to highlight their COVID-19 response along with their products.

As per the Dentsu Aegis Network report, India’s digital advertising in 2019 witnessed a 26 per cent increase over 2018 to reach Rs 13,683 crore, with overall advertising witnessing a growth of 9.4 per cent. The report says digital outreach continued to increase and was likely to grow at 27 per cent to Rs 17,377 crore by the end of 2020. However, with the pandemic, market pundits are unsure if the numbers are attainable. An ad with a good recall value though? Always attainable.