Under Attack From BJP, Can Uddhav Thackeray Sail Through A Political Turmoil As COVID Lurks?

They say the tree breaks if it doesn’t bend in a storm—or gets uprooted. An old cliché. Shiv Sena chief Uddhav Thackeray knows when to bend and how much, yet stand upright. He won’t be leading the Maha Vikas Aghadi (MVA) government in Maharashtra if he didn’t. It’s a coalition of arch-rivals whose ideological fountains spring from completely different fonts of wisdom. Opposites attract but the chief minister’s predecessor, Devendra Fadnavis of the BJP, is confident such friendships don’t last long. “Aisi sarkaren kabhi paanch saal chali hain? (Have such governments ever lasted five years?),” he said in a recent interview. His is not the solitary voice portending the Shiv Sena-Congress-Nationalist Congress Party (NCP) government’s premature end. Its downfall, naysayers believe, will come from the internal contradictions within the coalition over the coronavirus crisis and issues before the pandemic.

The Sena chief appears undeterred, despite facing daunting challenges to prove equal to both political and administrative tasks. He completed six months of his tenure, though it was anything but smooth for him. The CM—with no experience in governance, never aspired to take over the reins of the MVA government in the first place—could not have seen it coming when he took oath on November 28 last year. Since then, the 59-year-old leader’s political and administrative acumen has been tested on shifting anvils. Arresting the exponential spike in COVID-19 cases; tackling the humanitarian crisis triggered by the exodus of migrant workers; plugging cracks within the coalition; handling Cyclone Nisarga. Not to speak of the mob lynching of sadhus in Palghar and the prolonged uncertainly over his election to the legislative council.

Nisarga blew over, but there’s one cyclone he has to fight constantly. Former ally BJP has been breathing down his neck and accusing the Sena of backstabbing its voters by forming the coalition with NCP and Congress. The BJP and Sena contested last October’s assembly election as pre-poll allies, but fell out as both parties wanted the chief minister’s post and negotiations for a timeshare formula failed. BJP leaders called it a “great betrayal”, and would lose no opportunity in pushing the Sena chief to the corner. They have demanded President’s rule over Thackeray’s “failure to contain the contagion”. Fadnavis even visited governor Bhagat Singh Koshyari to express concerns over the state’s COVID-19 situation. Though he declared that his party was not interested in bringing down the Sena-led government, he accused it of being indecisive. “Chief minister Uddhav Thackeray is new and is scared of taking action and depends a lot on the bureaucracy,” he says. “There is no coordination in the state government.” 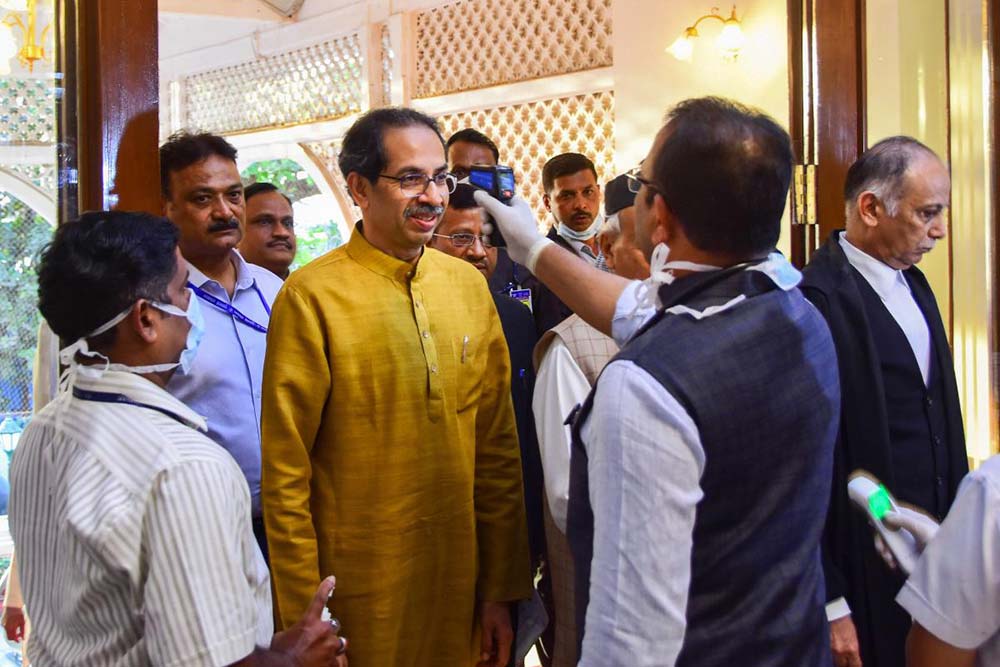 Rising temperature—spike in COVID-19 cases is a bigger storm for Uddhav Thackeray.

It is, quite naturally, expected of the Opposition to keep reminding the government about the state’s runaway rate of infections. The BJP is doing just that. But the narrative is getting infected. The BJP alleged that the Maharashtra government was indifferent to thousands of migrant workers seeking to return home during the lockdown. Railway minister Piyush Goyal said the state has not furnished information about the number of passengers for the Shramik trains from Mumbai. Fadnavis staged a ‘Maharashtra Bachao’ protest on May 22 against the government’s handling of the pandemic. “Most cases, most deaths. The healthcare system has completely collapsed. This is the abject failure of the government. We have always cooperated with the state government. But how much will the people have to tolerate?” he tweeted. The Sena leaders were quick with their response. “One political party state unit has set a new low and a new world record…the only party in the world to indulge in politics and in spreading fear, hate and division when the world has forgotten all of it to help each other. The party has forgotten the pandemic,” Aaditya Thackeray, the CM’s son and Sena leader, tweeted his riposte.

The CM is learning from the book of accumulating experience, though the pandemic is proving a tough chapter. Maharashtra has the nation’s highest number of infections—70,013 as on June 2—and 2,362 deaths. The situation has been particularly grim in Mumbai, where all activities have remained suspended for more than two-and-a-half months, dealing a crippling blow to India’s financial capital. The government has extended the lockdown till June 30. Restrictions will be eased in three phases under its “Mission Begin Again” programme, but there is no sign of any let-up in the pandemic’s run.

“The chief minister is new and scared of taking action,” says Dev­endra Fadnavis of BJP.

Thackeray has managed to rally his allies by his side, despite intermittent reports of differences within the alliance. The BJP’s relentless attacks are probably pushing the ruling allies to stick together more closely. While NCP president Sharad Pawar has chosen to describe Fadnavis as an “impatient man”, senior party leader Nawab Malik avers that the BJP will not be able to destabilise the government. “Let the BJP keep dreaming about the Maharashtra government’s fall,” Malik, a cabinet minister, says. “They have a right to dream but all the coalition parties in the government are together. Nobody can do anything.”

But the unity rhetoric follows Pawar’s recent meeting with the governor and Congress leader Rahul Gandhi’s remarks that his party is not the key decision-maker in Maharashtra. Political observers called these developments a conscious bid by both leaders to insulate their parties from any negative fallout of the coronavirus crisis. Thankfully for Uddhav, the allies have scotched such speculation. “There is no difference of opinion among the allies,” says Malik. “Our government is stable and there is no crisis.” The state’s senior Congress leader, Baldev Khosa, says Thackeray is working hard and sincerely. “There are no two opinions about it. All the doctors, nurses and the policemen have been doing a yeoman’s job these days.” According to the four-term legislator, “the government and the Brihanmumbai Municipal Corporation have done well to deal with the situation”, in spite of Mumbai’s huge population of about 1.80 crore.

The coalition maybe united on an unknown, killer virus ravaging the world and the state. That wasn’t the case before the pandemic blew up. In February, the NCP-Congress and the Sena seemed to be on a collision course after the National Investigation Agency (NIA) took over the Elgar Parishad case. In August 2018, the state police picked up five activists, including Varavara Rao, and accused them of having funded the Elgar Parishad meeting held in Pune district on December 31, 2017, where inflammatory speeches were allegedly made. Pawar criticised the CM for supporting the transfer of the case to the NIA. Home minister Anil Deshmukh of the NCP was quoted as saying that the CM overruled him. Earlier, on the CAA-NCR-NPR issue, the NCP and Congress differed sharply with the Sena, which had voted in favour of the citizenship (amendment) bill in the Lok Sabha in December. The ship is steady for now. Will the government complete its term? It depends on the Sena’s post-pandemic equations with the allies, especially Pawar, who holds the key to its survival.