Albert Szent-Gyorgyi was a giant of twentieth century science. His discoveries on Vitamin C, the Krebs cycle and how our muscles function are part of textbooks of biochemistry.  He once wrote how, in his search for a picture of life, the torch-light slipped over the very edge of being: “I started with anatomy, then shifted to function, to physiology, and studied rabbits. But then I found rabbits too complicated and shifted to bacteriology…later I found bacteria too complicated and shifted to molecules and began to study chemistry…. I ended with electrons which have no life at all—molecules have no life—so life ran out between my fingers actually while I was studying it, trying to find it…”

Szent-Gyorgyi was not alone in this. The boundary that separates the non-living from the living—that mysterious cusp—is a real one, but trying to put that knife-edge under a microscope can actually impede understanding life on this blue planet. Take the most abundant biological entities of nature—viruses. The sheer number and diversity of viruses easily dwarfs humans, our crops and domesticated cattle, the billions of insects teeming in the tropical forests, even the microscopic organisms abundant in any river. A litre of seawater may contain a hundred billion viruses of few thousand different kinds! They occur in millions in the lungs and intestines of healthy people. They are present deep below the Antarctic surface, in the subterranean caves of Mexico, on the scorched sand dunes of African deserts, and in almost every living species scientists have studied. They control the growth of bacterial populations, play vital roles in the mega geochemical cycles that make up our environment and can, of course, evolve—jumping from one host species to another, as we now are only too keenly aware. It’s no wonder that Carl Zimmer referred to the Earth as “a planet of viruses”. The present global crisis brought on by Covid-19—directly linked to rampant deforestation and illegal animal trade—is a result of our unbridled and greedy misadventures into virosphere.

Also Read | Our Live-in Virus: What Does the Real Covid Map Look Like?

“Stunning as it may seem, the DNA in our chromosomes is peppered with sequences that once belonged to active viruses.”

Yet, viruses are not exactly ‘alive’ in the sense cellular organisms are. The latter are made up of one or many cells. Indeed, many of them, like ourselves, form large, organised cellular associations—a body. The bodies move, eat, fight, take in resources to build their cells and, in time, mate with other bodies to make more cellular entities like themselves—the next generation. The instructions for doing all this is encoded in a long chain-like polymer(s), called DNA, present within the cells. The DNA is a manual, a blueprint; different links in the chain—genes—carry the information for making different proteins. Following those commands embedded in the DNA, the rest of the cell makes proteins. In turn, the proteins (like insulin, antibodies, enzymes and collagen) join hands to do all the physiological work, finally leading to reproduction and thus ensuring that there are more copies of that body and the DNA within. It’s teamwork between the cell’s DNA and protein-making apparatus. 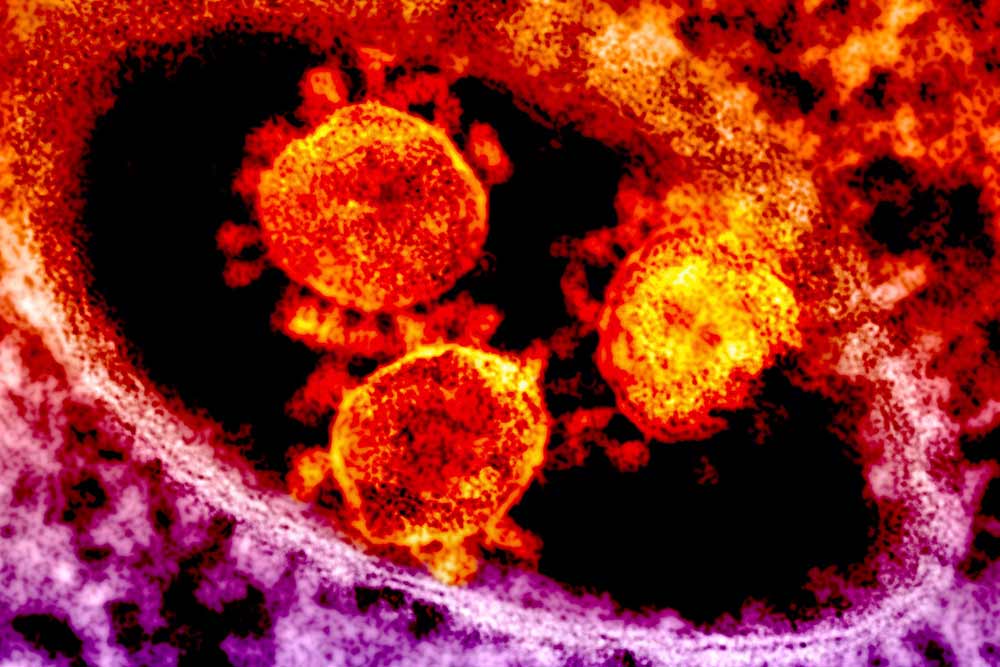 Viruses do the same but they have found a shortcut. They do carry DNA (or RNA, a related molecule), but, being so tiny, there’s no space for the protein-making apparatus. There’s no need either: when a virus infects a cell, it hijacks the latter’s protein-producing factories, captures the depots of nutrients and commands the cell to make only multiple copies of viral proteins and viral DNA! Thus, although they carry only a part of the ingredients essential for life, viruses are intracellular parasites that evolve and flourish in the foggy zone that demarcates the living from the inanimate.

Also Read | Did The Lockdown Work? What Did It Do? Would Have Happened Without It?

How viruses evolved this ‘hijack strategy’ is an enduring mystery. The fact that prehistoric viruses have not left fossils has not helped either. But today, there’s a wealth of knowledge that take us to the very origins of life. Notably, even within present-day cells, some RNA molecules can store genetic information (like DNA does) as well as catalyse biochemical reactions (like proteins do). This is an indicator that at the very dawn of life, in the hot, anoxic oceans of the primordial world, simple chemicals formed bonds resulting in complex molecules and some of them, in turn, gained the chemical ability to make copies of themselves. It was certainly not an efficient process, more like a stenographer who makes mistakes while typing several copies of a document, so soon there were variants of the parent molecule that were competing with each other for better duplication. In time, small RNAs (or the more stable DNAs) might have joined to form larger chains of genes, and then a membrane of fats probably enclosed them to form a mobile, self-replicating unit. Alternatively, some proto-cells might have gained both DNA and protein-making machines, but then lost the latter and learnt to enslave neighbours who had both. Probably both mechanisms gave rise to the vast repertoire that makes up virosphere today. Evolution by natural selection had found its way. 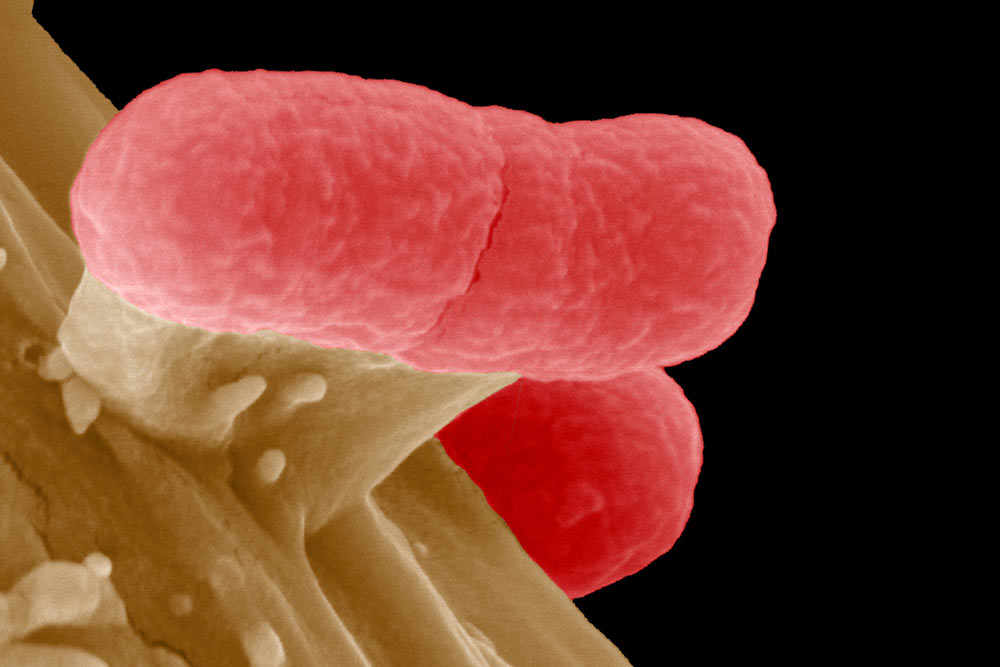 What is certain is that it’s this ancient lineage that has made viruses so ubiquitous. Animals, plants and bacteria—all are hosts to viruses in this timeless struggle for existence. The most abundant of viruses are the bacteriophages, literally the ‘bacteria-eaters’. But, phages do not only devour bacteria. They constantly shuttle fragments of bacterial DNA from one cell to another, creating fresh combinations of genes and thus providing fodder for evolution. Science has put these phage-couriers to good use. During WWI, Felix d’Herelle discovered that bacteriophages could be used to cure soldiers of dysentery. Popular in the 1930s, phage therapy lost to ‘non-living’ antibiotics. However today, when antibiotic-resistant bacteria have significantly blunted our ability to stop infections, phage therapy is being studied with renewed enthusiasm. In addition, oncolytic viruses are being harnessed to selectively target and kill cancer cells. Thus, no more only parasites, viruses now answer to that proverb—“an enemy’s enemy is a friend”! The utility of viruses does not stop there. Rather, their perennial arms-race with bacterial cells is the source of what are called restriction enzymes and CRISPR-Cas, sets of bacterial proteins without which many of the applications of modern biotechnology would be impossible.

Also Read | Covid Sit-Rep: The Worst Is Yet to Come, But What Will ‘The Worst’ Look Like?

There are others who are less friendly, of course—for example, the malignancy-inducing Papillomavirus and Hepatitis B viruses. But, humankind’s association with viruses goes way beyond diseases and modern technology. Stunning as it may seem, the DNA in our chromosomes is peppered with sequences that once belonged to active viruses. Called Endogeneous Retroviruses, these relics of past encounters make up more than 8 per cent of our genomic space—a colossal number when you consider that our protein-encoding sequences take up hardly 1.5 per cent! None of them make active viruses any more, but some have been recruited into our cellular circuits. One noteworthy retrogene is Arc, which is essential for long-term memory storage in the human brain. Another is Syncytin. Originally from an endogeneous retrovirus, it has got harnessed to build up the placenta—a unique mammalian organ without which none of us would have been born! These new findings, however, should not confound us. After all, the present is a fleeting snapshot on the evolutionary timescale and, like viruses, we are little more than carriers and mixers of genetic information. The rest—culture, history, societies, politics—are facets of human collective imagination.

Kerala Is Not Easier To Manage Than New York: K.K. Shailaja

What is ICMR? The History And Geography of Disease Control

Does India Have A Milder Epidemic? Not Really

(Anirban Mitra is a teacher of molecular biology and biotechnology, based in Calcutta. Views expressed are personal.)