Storms Like Amphan Have Made A Deal With The Natural World

Surface reality can often so batter our lifeworld, and so overwhelm our senses, that it’s difficult to grasp a deeper reality. Remember how we were able to think contrarian about the COVID-19 pandemic—over and above our natural species-level dismay—as a chance for nature to heal itself? On May 20 at around 1730 hours, we got another chance to revisit our assumptions as the cyclone Amphan entered over the gloomy expectant skies of Calcutta and its adjoining areas. We know the basics by now. To recap, the formation—an estimated width of 40 km at the eye and 120 km for the whole wall cloud—descended from the south of coastal Digha on the Bay of Bengal, at a speed of 30-40 kmph. Its moist core held the gigantic energy of a super storm rotating anti-clockwise at a speed of 160-180 kmph, accompanied by gusts up to 200 kmph. It left in its wake a trail of destruction as localities and streets cowered and lay blanketed in darkness as power was switched off to avoid accidents. Soon, water from overflowing drains merged with the street to resemble one large stream of gushing water. It had rained a full 244 mm in approximately five hours.

Now let’s zero in on a key site: the Sunderbans forest, 120 km south-southeast of Calcutta. As a peripheral human habitat, it was as exposed and vulnerable (if not more) as the city and its suburbs to the huge cyclonic core of Amphan. But as a natural barrier, it took the full brunt as it checked the speed of the cyclonic formation. This is as was to be expected. In seasonal low-pressure situations, gusty winds and thunderstorms approach Bengal from the south over the Sunderbans in a unidirectional path; so the mangrove forests act as efficient wind-breakers.

As a natural barrier, the Sunderbans took the full brunt as it checked the speed of cyclone Amphan.

The havoc that Amphan caused to Calcutta is there for all to see. But what drama or tragedy was taking place in those mangroves—the arcane depths of Sunderbans? The sparse human settlements there were torn asunder. But what about its other denizens? After all, it’s home to the largest and most dangerous crocodile in the world, the Crocodylus porosus, and the heartbeat and pride of any Indian forest, the charismatic tiger!

First, a brief map. The total area of Sunderbans is 9,630 sq km, containing a constituted forest area of 4,260 sq km of evergreen mangrove forest—indeed, the single-most extensive mangrove forest in the world, which has been under scientific management for over a century. The area outside it is land reclaimed from the delta in phases with government approval, beginning as far back as Warren Hastings in 1770. Even those early records show the prime objective for reclamation to be human settlement and agriculture. 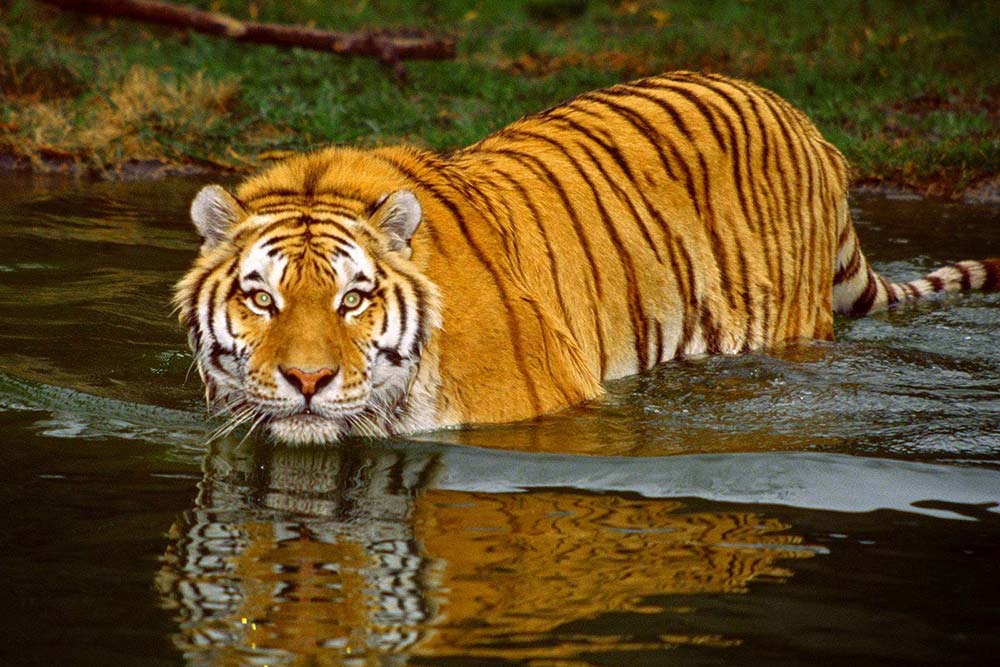 The Sunderbans tiger is a strong swimmer.

The terrestrial and anthropogenic (human impact on environment) footprints on the Sundarbans reveals a tumultuous history. It has always been subjected to periodic ravages of nature in the form of cyclones, inundation by tidal bores, earthquakes, erosion and degradation of soil when estuarine rivers changed courses, as also land subsidence. Early evidences of human presence were mostly swept away owing to subsidence in the whole of lower Bengal during the middle of 6th century AD. Many popular ports and cities have thus disappeared from our maps! Even in 1688, Sagar Island had a population of 2,00,000 people—but land subsidence and inundation swept away the entire population that year. A major subsidence was again recorded in 1707, and an earthquake in 1737. Water rose by 40 feet and most areas were depopulated.

An overall balance is maintained as a web of interrelated factors. Take the tiger, for instance.

Now, numerous studies have been done to study the effects of natural calamities on human populations and chart out a course of action to help secure the fringe population settled in Sunderbans—even if observed tragically in the breach. But measuring the strains on its true denizens, its wildlife, has never been easy.

We can start with what is apparent: the forest survives in all its pristine glory. It is as if natural calamities and storms like Amphan have made a deal with the natural world. That it will save its harshest strike for the anthropogenic element, or on human activity that pollutes the environment. The natural world has no intention to cause disharmony within itself. Some damage is expected—a tiger, for instance, was found dead on the forest floor following a storm in 1991. It had apparently fallen into the current of a large estuary amid incessant rain and strong winds, when a steep shoreline gave away under its weight. The tiger could have managed to swim ashore but was injured by a sharp, broken stem of a tree that jutted out at an angle from the river bed. Submerged and hence unseen, the stem pierced the tiger’s abdomen—the strong current bringing about the impalement.

But accidents do not give us a rule. An overall balance is maintained as a web of interrelated factors. Take the Sunderbans tiger. It’s a strong swimmer. Its tail base is thicker and more muscular than that of other Indian tigers, since it habitually uses it as an oar. Plus, the high grounds of the forest archipelago are not always submerged for a long period. Water drains out to the sea quickly, unlike the stagnant, rancid pools we see in cities. On the flip side, if the peaking time of the cyclonic surge coincides with the lunar phase, that triggers a bore tide—and things are on tenterhooks for the entire wild population. 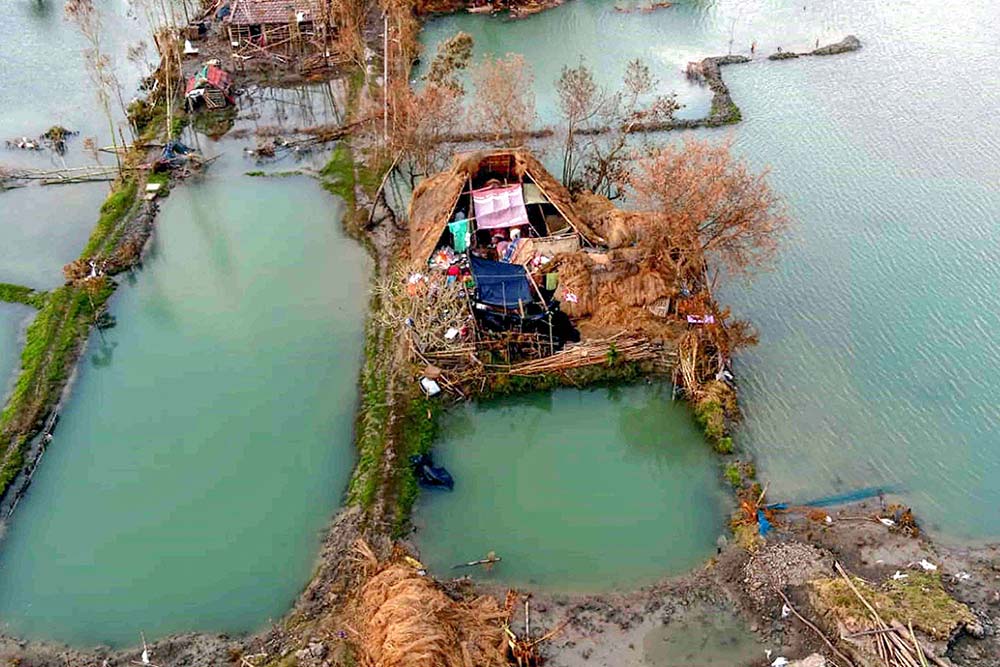 On May 20, it was the phase of the waning crescent, just one day to the new moon…the time for very high natural tides! So the threat from Amphan was extreme—the tidal surge would have swallowed more and more high ground. And seawater did indeed push 25 km inland. Shrinking high ground would mean no ‘social distancing’. Putting prey within reaching distance of predator, with no escape route, sounds like nature playing a cruel joke on one species. But again, a tiger is not a wanton killer. It only kills when hungry. This writer has seen tigers pass by bait without making any attempt to kill them. Under Amphan, the universe of both predator and prey was equally threatened. No one would have been thinking of just a meal, literally.

Amphan holds no bias…pulling down the high branches for the herbivores to feast on leaves on the forest floor.

Talking of meals, the day after, the fast receding waters of the estuary leave ample fish in the eddies created on the shoreline and on the large cavities on the forest floor left by uprooted trees. It happens in the cities too. In an incident reported to the BBC on May 21, 2020, a unique sight had been spotted near the gates of Presidency University on College Street, Calcutta. A small catfish, marooned as the street waters receded back to the Hooghly, was being preyed on by a street dog. So imagine places where nature is bountiful! Tigers, fishing cats, otters having the time of their life; free meals literally, with no workload on their shoulders. The Amphan holds no bias, like a herd of elephants passing through a forest, and pulling down the high branches to the ground, scattering succulent leaves on the forest floor that would otherwise have been out of reach for the herbivores. As fresh rainwater trickles down the trunks of trees and drips off the tips of cupped palms of leaves, all take turns to sip at the nectar, for they had been drinking saline water till then.

Why should humans be left out of their share of nature’s bounty? The huge cache of freshwater received by coastal river systems offers a chance for a sizeable influx of the dream fish of Bengal, the Hilsa! Wait for it to happen.

(The author is a retired Indian Forest Service officer. He has numerous publications in scientific journals in India and abroad. Views are personal.)