The best MI vs KKR clashes in IPL

The 13th season of the Indian Premier League (IPL) was originally scheduled to kick off on March 29. The spread of the Covid-19 virus has resulted in an indefinite postponement with the possibility of it being cancelled. So we’re reliving some of the best clashes between the franchises and standout performances. As per the original schedule, Dinesh Karthik-led Kolkata Knight Riders (KKR) would have locked horns against defending champions Mumbai Indians (MI).

Mumbai have been the superior side with 19 wins out of the 25 matches that have been played between both the sides. Kolkata have won the remaining six.

Mumbai are completely demolished by KKR (2019)

The first fixture between the two sides during the last season saw the batsmen from KKR go all out. It started with young Shubman Gill and Chris Lynn smashing quick half-centuries, setting the platform for the others. After Lynn’s dismissal, Andre Russell joined the party and scored 80 runs from 40 balls to helping KKR post a gigantic target of 233.

In response, Mumbai got off to a slow start with the match swinging away from their hands. However, a brilliant effort by Hardik Pandya gave theme some hope. However, his 34-ball 91 was just not enough. 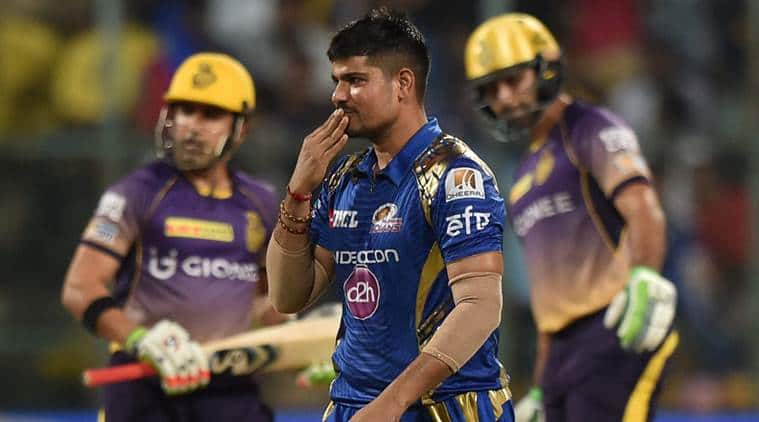 Karn Sharma returned with figures of 4/16 in 4 overs against KKR in second qualifier. (PTI/File Photo)

Despite it being a do-or-die situation given in the second qualifier, Mumbai Indians bravely rested an experienced Harbhajan Singh and picked leg-spinner Karn Sharma instead. However, the decision worked perfectly for the Rohit Sharma-led unit as the bowler ran through the opposition’s batting and returned with match-winning figures of 4/16.

It all began in the fifth over with Karn removing Sunil Narine on 10. In his second over he got KKR captain Gautam Gambhir to throw away his wicket. In the very next delivery, Karn trapped Colin de Grandhomme in front of the stumps and later dismissed Ishank Jaggi. Restricted to 107, KKR were unable to prevent Mumbai from cantering to victory.

A moderate target of 164 became a mountain for Mumbai Indians as T20 specialist Narine returned with clinical figures of 4/15 in 4 overs to help his side clinch a 41-run victory. It all began with him taking the wicket of Michael Hussey in the fourth over. But then captain Rohit and Ambati Rayudu stood firm to stabilise things.

But then Narine came back for a second spell that was critical. He first removed set Ambati Rayudu in the 17th over and followed it up by dismissing Collin Anderson and Harbhajan Singh in his next over. Mumbai never recovered and fell 41 runs short.

After electing to bat first, it seemed like the decision had backfired for Mumbai Indians. Shakib al Hasan removed Tendulkar on 2, but then Rohit scored an unbeaten 109 from 60 balls to help his side post a stiff 182/1 on the board.

In response, KKR failed to get off to a good start, losing openers Manvinder Bisla and Gambhir on 1 and 0 in the first two overs. Jacques Kallis and Yusuv Pathan did put up some resistance in the middle with the South African scoring with 79 from 60 balls. However, their efforts weren’t enough as MI eventually won the contest by 27 runs, (Sachin Tendulkar in action during the IPL. PTI/File Photo)

After electing to bat first, Tendulkar with Sanath Jayasuriya gave Mumbai the perfect start. The experienced pair added 127 for the first wicket, before Australian all-rounder Brad Hodge trapping the Indian leg-before on 68 from 45 deliveries. Jayasuriya also got his half-century and Mumbai posted a challenging 187/6 on the board.

In response, KKR could only manage 99, with Lasith Malinga emerging as the standout bowler from his side. His three wickets in the contest came in just 2.2 overs and the Sri Lankan was supported by Abhishek Nayar, who also took three wickets in three overs.