Long after it is over, this year’s Rath Yatra in Puri will leave a bitter taste in the mouth. Not because of anything that happened during the showpiece event of Odisha’s socio-cultural calendar, but due to events leading up to it. And the dubious role that the Naveen Patnaik government played as the suspense built up.

It was edge of the seat, nail-biting stuff till the very end. The prolonged series of rituals leading up to the pulling of the three chariots of the deities—Lord Jagannath and his siblings Lord Balabhadra and Devi Subhadra—on the 3-km-long Bada Daanda (Grand Road) was scheduled to begin at 3 am on June 23. But, until 3 pm on June 22, it was not certain whether the spectacular event would take place at all! The go-ahead by a three-judge bench of the Supreme Court headed by Chief Justice S.A. Bobde for a Rath Yatra without devotees, reversing its own order banning the big event due to the COVID-19 pandemic, came barely 12 hours before the rituals were to begin. Despite the ban, preparations for the event had been going apace in anticipation of a last-minute change in the court’s opinion. Even as the verdict was awaited on June 22, hundreds of makeshift shops on the Grand Road were being cleared by the district administration. The ropes (to pull the chariots) were fastened on the three chariots and the ‘agyaan maala’, the prelude to the shifting of the deities from the sanctum sanctorum to the chariots, had also been duly brought.

Minutes after the verdict, top honchos of the state administration and police, including the chief secretary Asit Tripathy and the director general of police, rushed to Puri to oversee the arrangements such as the sealing of the whole town and a complete ban on entry of outsiders, to comply with the conditions imposed by the apex court. More than 800 servitors, who would participate in the pulling of the chariots, were tested for the coronavirus in a jiffy. 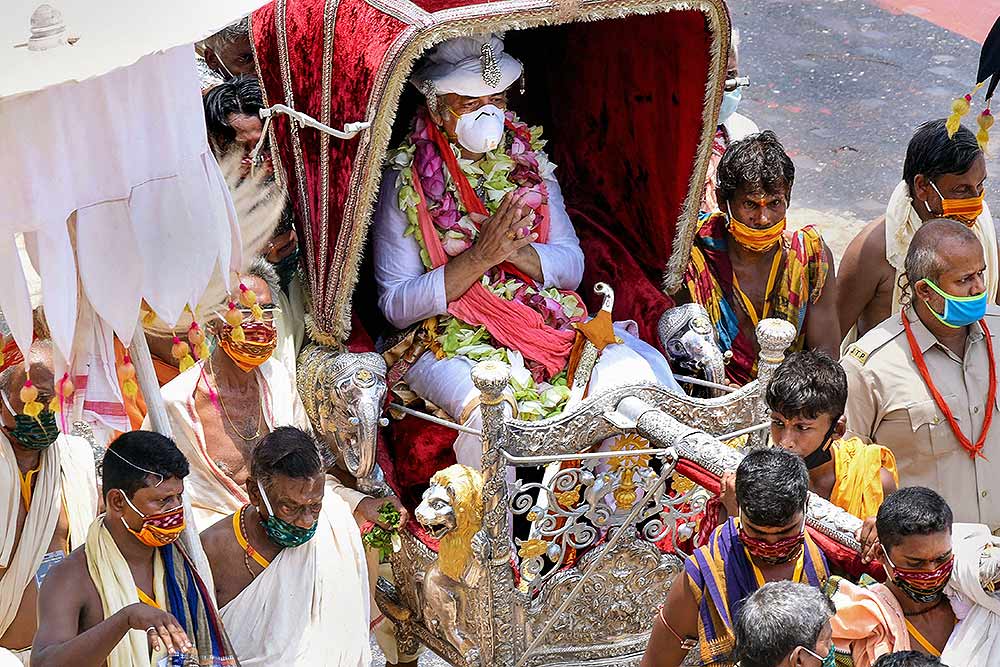 The king of Puri arrives at the Rath Yatra.

Many devotees believe divine intervention cleared the decks for the Rath Yatra. “What else can explain why the same bench allowed the Rath Yatra just four days after disallowing it?” asks Somanath Mishra, a devotee in Puri. On TV screens, old men and women were seen weeping and raising their hands in supplication to the Lord.

Asked if he would miss the unique experience of pulling the chariot, Biren Nayak of Bhubaneswar, who hasn’t missed a single Rath Yatra in 40 years, says, “That is also the Lord’s wish. If he wants me to watch the Rath Yatra on the TV, so be it.” Sadananda Mohanty of Puri says, “We all understand there was no way a normal Rath Yatra with the participation of lakhs of devotees could have taken place this year. The show must go on—that’s the important thing.”

Millions of devotees and hundreds of servitors are happy, but nobody is going to forget in a hurry the ‘run with the hare, hunt with the hound’ stand the Naveen government took during the first hearing of the case in the Supreme Court on June 18. While lulling the people into a false sense of complacency by allowing important pre-Yatra rituals like the Snana Purnima, the making of the chariots and so on to go ahead, it did everything it could in court to make sure the Rath Yatra does not take place. In an act that inevitably invited allegations of ‘case fixing’, the state government got its star counsel Harish Salve to actually argue against the holding of the Rath Yatra on the ground that “10 to 12 lakh people” would gather in Puri for the event. In doing so, the government was only being too clever by half because a Rath Yatra with the participation of devotees was never on the table. In its recommendation to the state government long before June 18, the Temple Management Committee had made it clear that it would be a token Rath Yatra with only servitors and policemen pulling the chariots. It was a strange hearing on June 18 as the petitioner seeking a ban on the Rath Yatra, an NGO named Odisha Vikash Parishad, and the respondent—the state government—appeared to be on the same side. 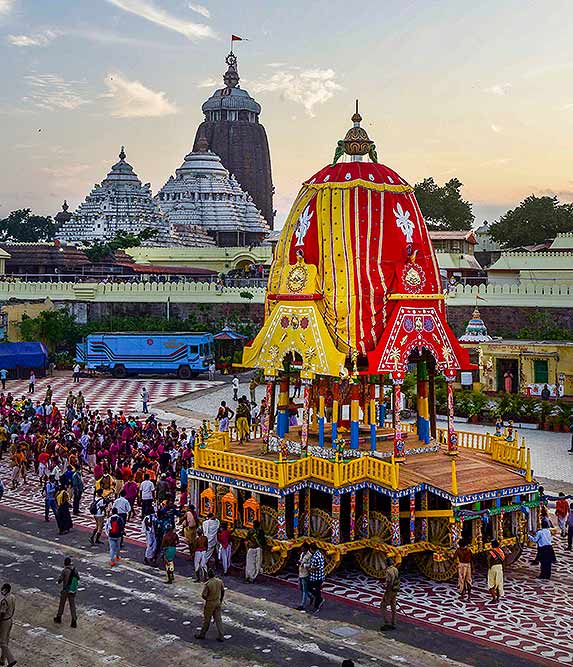 The tide began turning on June 18 itself as the government came under fire from just about every quarter. Allegations flew thick and fast that the petitioner NGO was actually fronting for it. Those who followed the developments closely asked how else this little-known organisation could afford a lawyer as expensive as Mukul Rohatgi, whose daily appearance fee reportedly runs into several lakhs. The government got cold feet after the Gajapati king of Puri, Dibyasingh Dev, ‘first servitor’ of the Lord, dashed off a letter to it on June 19 asking it to seek a modification of the Supreme Court order. The Shankaracharya of Puri’s Govardhan Peeth, Swami Nischalananda Saraswati, too did his bit by urging the court to urgently take up for hearing the batch of petitions filed by individuals and organisations seeking modification of the June 18 order, putting further pressure on the government. When it realised that further dilly-dallying could cost it politically because of the religious sensitivity involved, the Naveen government decided to do an about-turn and back a Rath Yatra minus devotees—something it could have done on June 18 itself, but had not. But if past experience is anything to go by, this too will pass—in any case, elections are nearly four years away! The Naveen government has been unscathed despite presiding over some of the worst fiascos in the history of the temple. One of the most noteworthy was related to the 2015 Nabakalebara, a once-in-19-years event that sees the deities changing their ‘bodies’, and another to the keys of the Ratna Bhandar, the treasure trove of the deities’ gold and diamond ornaments, which went missing in 2018 and remain ‘missing’.

Nabakalebara—in which the ‘brahma’ (soul) of the deities is taken from the old wooden idols and transplanted in new ones by designated priests—is considered the most sacred ritual in the 12th-century temple. As per the scriptures, the ritual is supposed to take place in the dead of the night in the presence of a select group of priests. But in 2015, the ‘soul transfer’ happened the next afternoon and became a virtual free-for-all, with all and sundry getting in. Some even managed to smuggle in their mobile phones and merrily clicked pictures! As if this was not bad enough, there were credible allegations of fixing in the selection of ‘darus’ (trees from which the new idols are made), which is supposed to be a divinely ordained exercise with the Lord instructing the priests in their dream (‘swapnadesh’).

L’affaire missing keys came to light in 2018 when a team of officials went to inspect the condition of the Ratna Bhandar as per a directive of the Orissa High Court, but reported that all is well without going in because the keys they had gone with failed to open the locks! Given the fact that an inventory was last made way back in 1978, the revelation about the missing keys predictably led to allegations of large-scale pilferage of the ornaments valued at hundreds of crores of rupees.

By Sandeep Sahu in Bhubaneswar