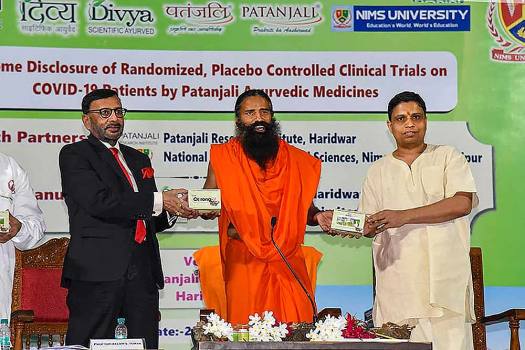 After Patanjali Ayurved Limited faced sharp criticism and government’s scrutiny for launching ‘Coronil’, a drug it claimed can cure Coronavirus, the company’s CEO on Tuesday said that they never claimed that the drug “can cure or control coronavirus”.

The shift in the statement comes after an FIR was filed in Jaipur against yoga guru Ramdev, Patanjali CEO Acharya Balkrishna and four others for “misleading” people by propagating Patanjali Ayurved’s drug Coronil as a cure for the infection.

“We never told the medicine (coronil) can cure or control Coronavirus. We said that we had made medicines and used them in clinical controlled trials which cured corona patients. There is no confusion in it,” ANI news agency quoted CEO Patanjali Balkrishna as saying.

The company on June 23 had said that it has come up with the “research-based medicine” and conducted clinical trials in joint efforts with National Institute of Medical Sciences (NIMS), Jaipur.

“We are proud to announce that the first Ayurvedic, clinically controlled trial based evidence and research-based medicine has been prepared by the combined efforts of Patanjali Research Centre and NIMS,” Yoga Guru Ramdev quoted as saying by news agency ANI at a press conference.

Soon after the launch of the Coronil drug, the AYUSH Ministry had asked the Patanjali to stop advertising till the drug and claims about it are examined.