Pangong Tso Lake: Why It’s A Sore Finger In Relationship Between India And China

A many-layered, dynamic riddle can have no single, simple, or permanent answer. India is at this moment presented with a set of fluid questions embedded within more fluid questions, rather like a perverse Russian doll—or shall we say, a Chinese doll? And geopolitics is not a lab science where one can isolate one strand and spend years perfecting the answer. The burning matches you see on this week’s cover of Outlook are a simplification: in reality, this situation has military, diplomatic, economic and geostrategic dimensions. And none of those domains offer complete, permanent answers even within themselves, leave alone any question of them being made compatible with each other. Since ‘status quo ante’ seems out of reach, New Delhi is at present fire-fighting, trying to maintain at least a tenuous status quo, while asking itself some searching questions.

What exactly happened in Ladakh over the last few weeks, and why? And how can it be stopped? The last question was easier to attempt. So thousands of additional troops have been moved up to the LAC—itself seemingly no permanent line in the riverbed sand. Many, rushed from the blistering heat of the lowlands of Uttar Pradesh, did not get time to acclimatise to the sub-zero temperatures, but they have dug in their hastily allotted snow-boots on the rooftop of the world, dogged as Indian jawans are wont to be. Gen M.M. Naravane, chief of army staff, also flew in on June 23 to meet the freshly deployed sentinel. Checking on operational preparedness was only one of his objectives. He was also there to be debriefed by corps commander Lt General Harinder Singh about his ongoing marathon talks with his Chinese counterpart, Major General Liu Lin. Government sources chose to describe the 11-hour-long discussions as “positive, with a mutual consensus to disengage” from all friction areas in eastern Ladakh. But even that’s only a partial description. 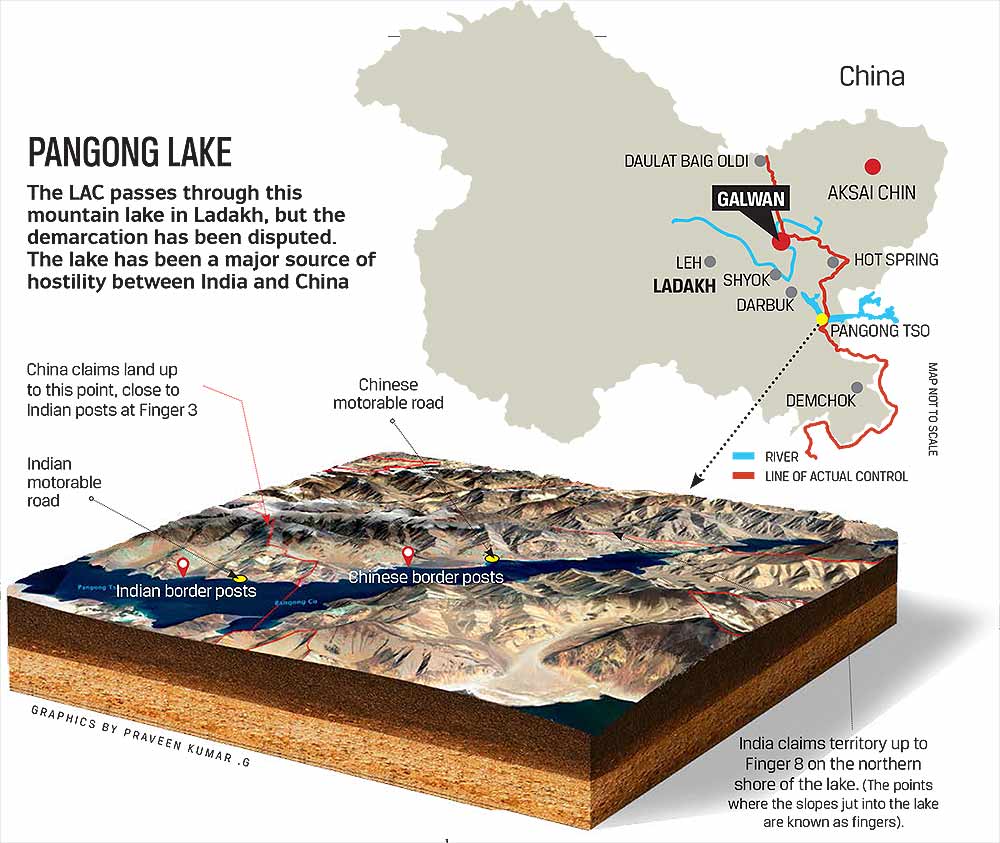 Why? Pangong Tso, for one. Here, some 230-odd km south of Galwan, the Chinese have come till ‘Finger 4’ and have built defence structures, including a bunker. Top government sources admit the statement regarding “mutual consensus to disengage” does not include Pangong Tso; the Chinese have shown no inclination to even discuss it. The spurs of the mountain range on the northern bank of the Pangong Tso jut towards the lake like a palm, with the protrusions looking like fingers. They are demarcated on the maps as ‘Fingers’. The area between Finger 1 and 4 was in India’s control; between Fingers 4 to 8 was an area that both India and China patrolled. Indian and Chinese PLA soldiers had had a scuffle on Finger 4 on May 5. Besides building a bunker, the PLA had also constructed a moat-like structure to deny Indian soldiers access to an area they regularly patrolled before. Plus, they deployed additional troops. India responded with extra troop presence too, resulting in a standoff. That has cooled, but the bunker and moat stay.

Sources admit “mutual consensus to disengage” does not include Pangong Tso; the Chinese won’t even discuss it.

Besides military-to-military engagement, the apparatus of bilateral diplomacy is also in action. Joint secretary-level talks have started with the forbiddingly named ‘Working Mechanism for Consultation and Coordination on India-China Border Affairs (WMCC)’ meeting virtually. The mandarins of geostrategy, who have not been this busy in a long time, are not pinning too much hope on these though. They believe the time has come to craft a new China policy. Former foreign secretary Kanwal Sibal says the established systems of engagement between the two countries don’t seem to have worked. There have been 14 rounds of WMCC talks at the joint secretary level since 2012, when the mechanism was set up. There have also been 22 editions of ‘special representative-level dialogue’ between the neighbours since 2003—the last being held in December, between National Security Advisor Ajit Doval and Chinese foreign minister Wang Yi. “Nothing much seems to have come out of these meetings,” Sibal tells Outlook.

It’s a big step China has taken this time, and it’s unlike its past incursions, says the former diplomat. “They wouldn’t have done it without detailed advance planning. They have a good understanding of Indian capabilities, but maybe they did not anticipate the mayhem. They have bitten off more than they can chew. The situation can deteriorate,” says Sibal. According to him, the situation is quite worrisome since the Chinese have entrenched themselves in Pangong Tso—even if Galwan and Hot Springs eventually see disengagement. “Getting the Chinese troops to withdraw from Pangong is not going to be easy. The question is whether China is willing to move back to Finger 8, and if they do, what will they ask from India. There are no easy answers,” he says. Sibal favours a constant, incremental push for status quo ante.

ALSO READ: Chinese Tension Haunts Ladakh Even As Valley Remains On The Boil

But that’s only military—he feels things should be ratcheted up elsewhere, and suggests using Tibet for leverage. “I don’t know why India has been reluctant to use Tibet; it’s the core problem between India and China. India should raise the issue of demilitarised Tibet. The time has come for China to engage with Tibet and the Dalai Lama. I don’t see any downside, and India can gain enormous manoeuvring space,” he says. 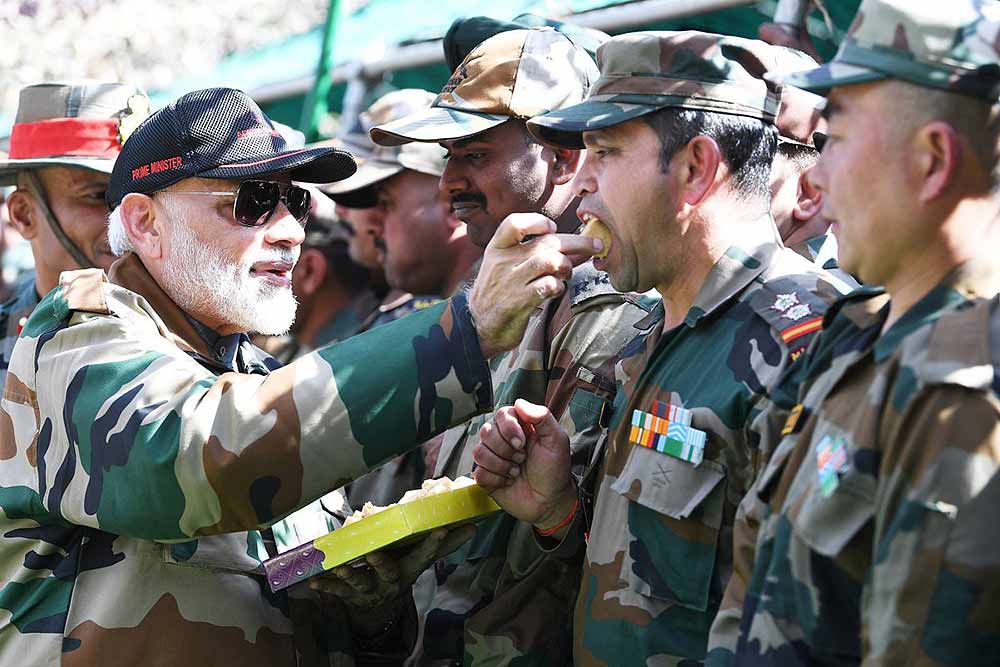 Former army chief Gen Bikram Singh, naturally, has a military solution in mind—outside of and concurrent with political-diplomatic engagement. To thwart China’s expansionism, “we must always keep our guard up along the borders. Our combat power, besides thwarting evil designs, should enable us to hit back expeditiously at places of our choosing. This requires compatible infrastructure, which must be developed at the earliest,” Gen Singh tells Outlook. What would that look like? The former army chief had pushed for raising a Mountain Strike Corps (MSC) with the capability of striking across hostile mountain territory. He believes the time has come to revive the proposal. An MSC, he feels, would provide India with “requisite deterrence” against China—“and should that fail, help win decisively any war thrust upon us.” This entails taking a leaf out of the PLA’s own book. The former general is looking at a capacity for “synergised multi-domain operations”, for which “we need to modernise and transform, like China is doing.”

But that comes up against an old peeve: lack of funds. An initial raising expenditure of about Rs 65,000 crore was required for the MSC, but a separate outlay never happened—an entire corps was expected to be raised by hiving off portions from the usual defence budget. So, while sanctioned in 2013, the MSC was stalled two years ago for paucity of funds. The army had by then managed to raise only one of its two proposed divisions: it’s now being tested for the army’s new integrated battle group (IBG) concept. Each IBG is proposed to be an agile, self-sufficient unit comprising of about 5,000 soldiers along with tanks, artillery, air defence, engineers and other support units. “This is the need of the hour,” says a senior serving army officer, “and it requires political will and support”. 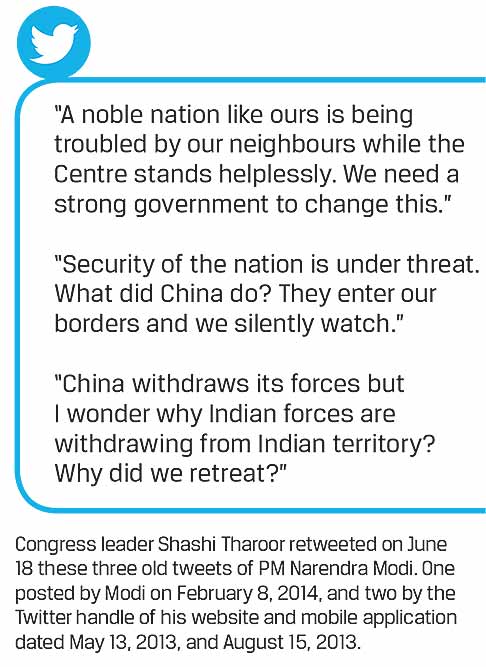 The political class, of course, is embroiled in its own combat games. With the Modi regime facing one of its biggest security and diplomatic challenges, the Congress has sprung into action—keeping up a fusillade of questions. While trying to walk a tightrope so as not to be seen as opportunist, the temptation to taunt the BJP on its pet theme of aggressive ‘nationalism’ has been hard to resist. Congress leader Rahul Gandhi chose the open platform of Twitter to point-blank ask the government whether it has ceded any land to China. Even former PM Manmohan Singh weighed in, warning Modi against any “historic betrayal of people’s faith”. Referring to Modi’s claim of there being “no intrusion”, Manmohan said “disinformation is no substitute for diplomacy or decisive leadership”. Modi had told the all-party meeting on June 19 that “no Chinese troop had intruded into the Indian territory”. His office later claimed a “mischievous interpretation” of the PM’s statement.

At the CWC meeting on June 23, Congress president Sonia Gandhi too was unsparing on the Modi government, accusing it of mismanaging the border. The BJP, in turn, is certainly in no mood to take the charges lying down. Party president J.P. Nadda accused Manmohan of presiding over 600 Chinese incursions between 2010 and 2013, and having “abjectly surrendered” hundreds of square kilometres of India’s land to China. Former finance minister P. Chidambaram struck back, asking Nadda about 2,264 Chinese incursions since 2015. BJP general secretary Ram Madhav charged the previous Congress governments with signing bilateral pacts that suited Beijing’s interests. And it goes on and on.

A serving security official can’t see the point in this trading of barbs. “All successive governments have failed to read China. It’s high time we acknowledge that India’s China policy, as a collective, has not worked in the past seven decades and rules of engagement need to change drastically. The time has come to rethink how we deal with China and the world,” he adds.