It was the morning of May 15. Mohammad Saiyub (22) and Amrit Kumar (25) had been travelling atop the roof of a truck for over a day. They were returning from Surat in Gujarat, where they worked in a textile unit, to their village Devari, 1,500 km away in Uttar Pradesh’s Basti. Amrit had developed a raging fever; his condition deteriorated as the blazing day wore on. The prolonged exposure to the sun had caused a heat stroke.

“He lay with his head in my lap. His body was burning, I could feel the heat,” says Saiyub. He told his friend to hang in there and that they’d find a doctor somewhere on the route. But, seeing Amrit’s condition, other passengers in the truck started growing uneasy. Suspecting that Kumar was a COVID-19 patient, they told the driver to get rid of him. Saiyub insisted that they be dropped near a hospital at least. But the frayed nerves ranged against him were overpowering, their demand heartless. The two were dropped about 50-60 km from the district hospital in Shivpuri, Madhya Pradesh.

As they got down, the driver told Saiyub, “Leave him. Why are you getting down with him?” It was a thought Saiyub couldn’t countenance even for a moment. All he wanted was his childhood friend to get well and their safe return to Devari—they mostly travelled together. Fortunately, they were dropped where a few good samaritans were serving food and water to migrant labourers in transit; they called an ambulance for the duo.

When Amrit was wheeled into the hospital that evening, he could barely speak. He and Saiyub were isolated and kept in different wards. Saiyub couldn’t sleep that night—the first of four sleepless nights that were to follow—haunted by dreadful portents about his friend. In the morning, a nurse informed him that his friend died the previous night from severe dehydration. Saiyub had to wait for another two days for their coronavirus test reports to come negative before he could bring his friend’s body back home. 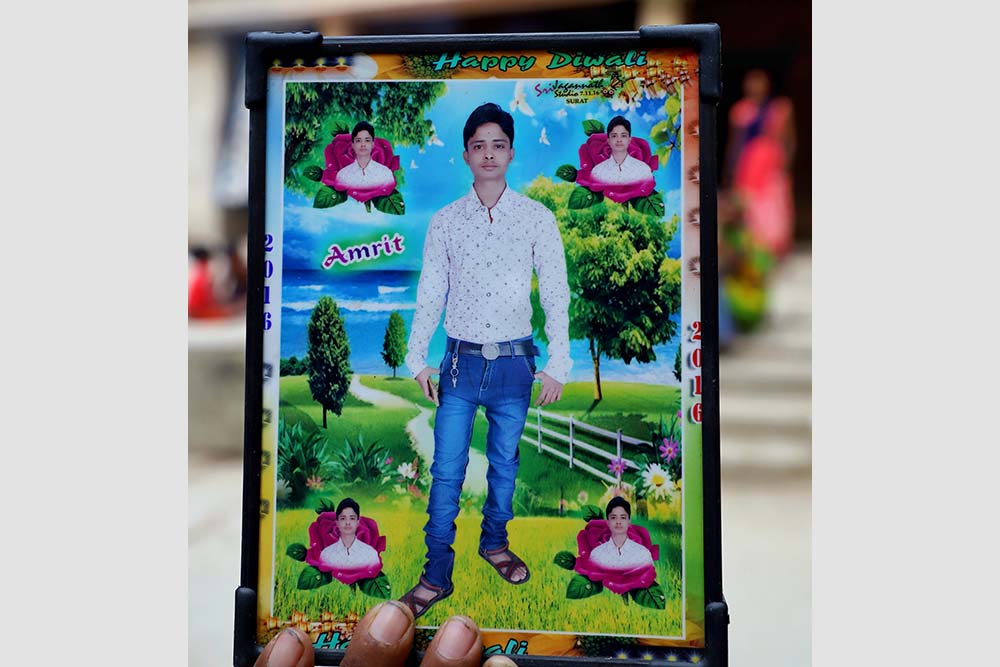 Devari is pleasing to the eye—nestled amidst folds of rich green, grazed on by shiny, taut-skinned buffaloes, its morning silence broken by the sound of a generator-powered pump and the gurgle of water it throws into a field. Amrit’s father, Ram Charan, is a frail man with legs too weak for hard farm labour. Amrit was the breadwinner for the family that includes three younger sisters and a brother. “He was only 17 when he left the village. It wasn’t the age for work but the situation…. Boys his age are still roaming around, some studying, yet to start work,” says Charan, who owns a small farm.

Amrit made Rs 480 a day—he got a small hike last Diwali—while Saiyub made Rs 400. Both worked on the loom and stayed together. “If we took a holiday, which was rare, we lost a day’s wages. We avoided going out even on holidays, as it would mean unnecessary expenses; we both knew the condition of our families,” says Saiyub. It was Amrit who took Saiyub to Surat on his own expense and got him a job. The lockdown first guzzled their savings; the journey back cost one of them their lives. Saiyub wishes the government had thought of labourers, given them some time and ran trains to help them return, as they are doing now.

Saiyub wishes the Centre had given labourers some time at first and helped them return, like they are doing now.

The young man is not sure when he’ll go back. “Even if lockdown is lifted, I am not going there for at least six-seven months. Jab dil bolega tab jayenge (I’ll only go when my heart says), adds Saiyub. “And now that Amrit is no more, I don’t even feel like going. Everything in the room will remind me of him. All his clothes would be there—he was fond of clothes and bought new ones whenever he had extra money. He loved music too, and had recently bought a Bluetooth speaker.”

Yet staying back is also a fraught decision. “What will I do in the village? I’ll go to the city and earn money.” There could be a few labour opportunities in the village, for instance on another person’s farm, or tending to somebody’s animals. A day’s work could fetch Saiyub anything between Rs 150-250 a day, but he is unenthusiastic. “I feel a little ashamed in doing manual labour here. All my friends are here. In the city nobody knows me,” says Saiyub, who has never gone to school. A friend suggests that he could get his job card made under MNREGA and get some work. Saiyub isn’t very keen still, but might take it up to earn something.

The village pradhan Mohammed Wakeel says that the number of MNREGA workers has gone up from about 1,000 to 1,200 after the lockdown. Devari has a population of 4,000, out of which 300 had migrated to other states for work. A majority have returned. “If they want to earn a living, they’ll have to go back. They are waiting for things to stabilise,” says Wakeel. He also met people from a different village who bore the brunt of the lockdown and swear never to return.

There is no industry in the area that could provide employment to people, Wakeel says; a sugar mill that used to employ a few hundred people shut down some years ago. “MNREGA can provide some assistance, but can’t be a proper source of income. The good thing about it is that women, who can’t go out of the village for work, can also do it,” he adds.

Eastern UP, where Basti is situated, is an extremely backward region, says Roli Misra, economics professor at Lucknow University. “The bottom four of the 100 aspirational districts (those with very poor socio-economic indicators) identified by the Niti Aayog are Bahraich, Siddharth Nagar, Shravasti and Balrampur. Basti shares its boundary with Balrampur and isn’t different from these districts,” says Misra, whose area of research includes migration and agricultural economics.

“About 80 per cent of people in the region are dependent on agriculture, and agriculture is largely dependent on erratic monsoons. As a result, many small and marginal farmers migrate to cities, where they see economic prosperity,” she says. “For those who have returned, MNREGA can at most be a stopover arrangement. There is a big difference in MNREGA and city wages; plus, it gives only 100 days of work, whereas cities offer work on all 365 days.” Time will smother Saiyub’s grief. Then, he might just have to take the long road back alone.

By Salik Ahmad in Basti, UP