Of Grief And Joy, Love And Loss: How We Are Dealing With Life And Death In Time Of Corona

The  most striking depiction of death that I ever read was in one of the Harry Potter books. It was the death of Sirius Black, a godparent to orphan Harry. While fighting in a fierce wizardly battle beside him, Sirius is hit by a powerful spell. Curving into a ‘graceful arc’, his body levitates and sails through the ragged veil of a mysterious archway, disappearing behind it. Screaming Sirius’s name, Harry dashes to pull him out of the doorway, but is grabbed by his well-meaning teacher, “There’s nothing you can do, Harry… nothing… he’s gone.”

Author J.K. Rowling doesn’t exactly say that Sirius dies. But he’s gone. Harry struggles with all his might to get out of the grip, to try and save Sirius, the closest to family he had, but in vain.

Except for the very physical passage of bodies that leave us, that is approximately how we feel and perceive people exiting our world. They disappear behind a veil, to the other side, of which we have not the faintest clue, and from where there can be no retrieval. Religions have guided our imaginations, helped us conceive of an other side. Even the sternest non-theism restores us to primordial matter: perhaps death is a bridge between philosophies. But it still does not illumine life. Clueless about what to do from this side, we often turn to religion, like we do for all things that lie beyond the fief of human capability. We perform the last rites as ordained by religion, pray for the departed soul. And for the voiding that has happened, we come together and seek support in each other’s company.

ALSO READ: Opinion | Grief Is Not An Event, It Can’t Be Cancelled Or Postponed. During Corona Time, We Have To Adapt

But what happens when you can’t do that? The lockdown in the wake of the coronavirus pandemic is forcing many people into that very marshy sphere of helplessness. A lady’s father passed away in Assam, and being stuck in Delhi, she could not go for the funeral. The void will remain forever, she says. An elderly man’s sister passed away, just a few kilometres from his house, and refusing all advice, even putting his own vulnerability aside, he went to see her that one last time, to touch her feet, to pay his respects in person. It would have always pricked him if he hadn’t gone, he says.

“We haven’t developed societies to live apart from each other. Everything we have done, the way we have built communities and cities and villages, it is to foster connections,” explains Sabah Siddiqui, a Pune-based psychologist who teaches at FLAME University. “And coming together when somebody dies has been a very important way of mourning. We gather to celebrate the life that has passed, and to look after each other…. The funerals have huge religious significance too. Not being able to give their loved ones a funeral they deserved causes a lot of distress to people, because it’s seen as necessary to allow them to move on.” Siddiqui works on faith healing and has studied healing practices of shrines for over 10 years.

A Chennai mob disrupted a doctor’s burial thinking it would be like sowing the virus.

The coronavirus has caused over 1,000 deaths in India in the past two months. As purely a statistic, it’s paltry because the country registers as many deaths every one-and-a-half hours on any given day. Yet, the billowing and malignant mist it has cast over everything far surpasses any number one can put to it. Yes, it’s the high possibility of contagion, the absence of antidote, indeed, the complete domination of public discourse by the virus…all that and something more has turned the country’s atmosphere, rather much of the world’s, paranoid and morbid. In some cases, it’s even disturbing our normal human responses to death. We are normally prone to according dignity to the dead—even if they be strangers. To say a silent prayer to the passing cortege.

But signs of depravity are entering even that sacred space. Last week, a group of 50-60 locals in Chennai attacked the ambulance carrying the body of a doctor who died due to the virus and disrupted his burial at a cemetery. Injured, bleeding, the ambulance drivers drove the corpse back to the hospital. A fellow doctor and two hospital ward boys then buried the doctor elsewhere, in the thick of the night, under watch of the police. The doctor’s son and wife had come to the cemetery, but had to flee to escape the mob. Rumour spread faster than a virus, fear leached into the soil…would a burial be like sowing the virus? That thought was enough for a neighbourhood to turn into a mob.

In Meghalaya capital Shillong, leaders of the Jhalupara locality did not allow the body of a doctor who died of COVID-19 complications to be cremated at the crematorium there fearing contagion. The traditional local council of Nongpoh town on the Shillong-Guwahati highway, where the ashes were to be buried at his farmhouse, also refused saying he was not a permanent resident of that place. Though residents of Mawryngkneng, a village near Shillong, offered to let the burial take place at the local cemetery out of gratitude for his service to them, he was finally interred at a cemetery in Lawmali area of the city about 3 km from the hospital he owned and where he had breathed his last the previous day.

In Ludhiana, the family of a 69-year old woman, who died due to the virus, refused to accept or cremate the body. Officials said they called the family twice and even assured them of providing protective gear. Nobody turned up. Not even the woman’s son. The body was finally cremated by the district authorities. The virus has truly subverted our long-enduring, unstated covenants about how to treat the dead. As if death, and its concomitants, have attained new, puzzling meanings.

This extends to another primal human event: birth. The sprouting of life in the middle of a disruptive dread is almost certain to be a reassuring, even stabilising experience. Birth is a moment of affirmation, Siddiqui says, of not just that you are alive, but that your future is also going to be alive through this new person. “It’s a promise of life, and its significance is greater at a time like this because the future looks uncertain and dark.” Perhaps this is why birth rates spike during a crisis. In desperate times, people fall back on life itself, she adds. Giving birth makes life meaningful; gives more life to life, as it were. “My friend, pregnant of five months, sounds much more positive than I do,” says Siddiqui. 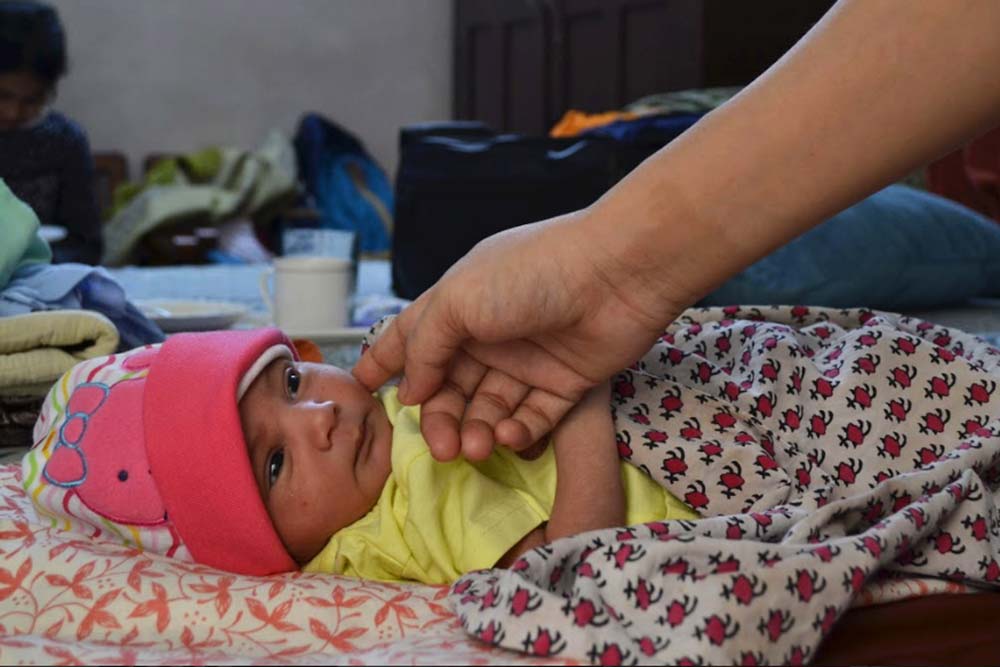 Earlier this month in Old Delhi, a woman in her early fifties gave birth to her first child through in vitro fertilisation. The child had been conceived after many failed attempts, and the family spent a huge amount on the process. The woman’s husband is engaged in the handicraft business and almost all their savings have been exhausted in the past year. With businesses coming to grief due to the lockdown, they have been further squeezed economically. But they have a baby, after years of marriage. In the thick of calamity, amidst an all-encompassing morbidity, a couple’s dreams came true.

How agonising must it be for a COVID-positive mother to be separated from her newborn!

Even hope has been a difficult emotion to reach for. A lot of women struggled to access maternal healthcare because of the lockdown. The regular checkups and tests during pregnancy became an ordeal as hospitals and clinics turned into high-risk areas. As corona assumed centrality, it was as if everything else had to be on pause. A woman in Delhi was in fact stopped by the police on the way to a clinic for delivery, and was only allowed to go after a phone call to the doctor.

We also heard heartwarming stories of healthy children being born to coronavirus positive mothers. India’s COVID-infected now number in excess of 30,000; among them are women who are expecting. There is an extremely unsettling dimension there, though. Owing to an almost cruel medical necessity, the newborns are immediately separated from the mother to avoid the risk of infection. What an agonising and alienating experience it must be! To not be able to hold your own baby, to be content with seeing images on phone screens, not knowing when the time would come for the mother’s touch, if at all.

Of the forces that govern us, death is the real master, potent and unpredictable. A few years ago, I found myself rep­orting on a story where a birth and a death happened in the family at the same time. Umar Mohammed, a cattle trader ferrying cows, was waylaid and killed by a group of cow vigilantes in Alwar. As his body went into post-mortem, his wife went into the labour room. The funeral would happen the next day. The baby wailed under a thatched roof. A small distance away, Mohammed’s father stood next to the body, facing the funeral prayer congregation, and asked if his son owed any­body anything. The only thing that hung in the air that day was death. The wails of the newborn had been eclipsed. There’s something about the sight, and sound, of adults wailing. Hovering like a djinn, the master was smiling.

Life & Death In Time of Corona: ‘It’s Easier To Mourn When You Are With Your Loved Ones’ — A Daughter’s Painful Tale Of Being Locked Out

Life & Death In Time of Corona: Home Alone When She Breathed Her Last

Tales From A Leap Year

Life & Death In The Time Of Corona: When Video Calls Can’t Fill The Void