Long way home for migrants in Konkan and the wait, even longer When he set out to walk from Mapusa in Goa, Saroj Bhan Rawat was prepared to walk for 25 to 30 days to make it home in Satna district of Madhya Pradesh.

“It was 11 of us. We set out after packing atta and rice. We would cut through railway platforms at night so that no one would see us. We worked at a building construction site in Goa and there was no arrangement for us to stay put at the shanties we lived in when we had no work. So, we decided to go home and walking was our only option. We were not sure what we would get to eat so we thought it was better to return to home,” he said from behind a face mask.

In five days, the 11 men had walked 216 km from Mapusa to Bhoke, one station ahead of Ratnagiri on the Konkan railway. On April 14, however, they caught the attention of policemen at the Bhoke station. The feeling of being “caught in the middle” haunts many even as the district administration tries to allay their anxiety, Rawat said.

“On the way, we didn’t find any transit camps. But after we reached Bhoke, some policemen accosted us. We pleaded with them to allow to walk further but they told us that arrangements have been made for people like us in Ratnagiri,” Rawat said.

Since April 14, the men have made a classroom in Damle Vidyalaya in Ratnagiri their home. The school is now home to 19 migrant workers – the 11 from Satna and others from the neighbouring district of Sindhudurg.

Ramswarup Kol, who started from Mapusa with Rawat, said the school was comfortable and there was no shortage of food. “It’s okay for now but this is not home. Had we been home, we could have helped with the work in our farms,” he added.

In the districts along the state’s coastline, migrant labourers are employed in large numbers mostly at construction sites, restaurants and hotels. A large number of workers from Nepal also migrate to Ratnagiri and Sindhudurg in the summer ahead of mango plucking routine and stay put until the end of May. 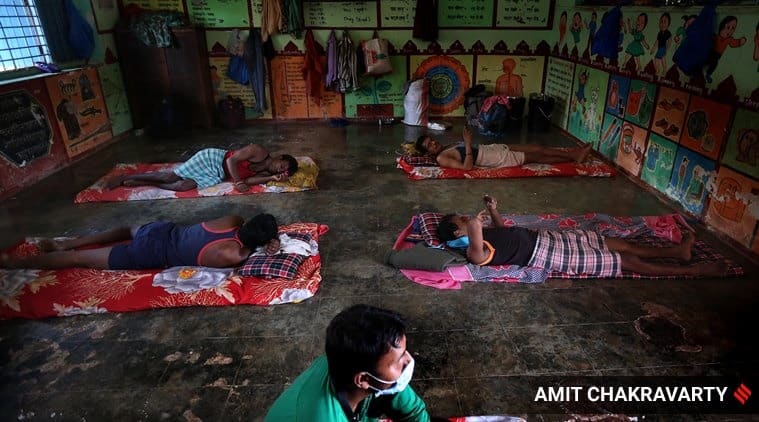 Since April 14, the men have made a classroom in Damle Vidyalaya in Ratnagiri their home.

Unlike many of his co-workers from Nepal, who have been coming to Konkan in the summer to work in mango orchards, Rajesh Chaudhry came to Ratnagiri for the first time this year. “We are okay here but with the COVID-19 pandemic and lockdown, I think I should’ve stayed home with my family,” said Chaudhry, who hails from Kailali in Nepal. He stays on a mango orchard with others from his village.

The feeling of being “caught in the middle” haunts many even as the district administration tries to allay their anxiety.

At Mangaon in Raigad, the displacement of construction labourers after many left for their hometowns before the lockdown on March 24, has taken a toll on the work on the Mangaon bypass, located on the Indapur-Wadpale section of the underconstruction Mumbai-Goa highway.

Alok Kumar of Chetak Enterprises, the Rajasthan-based company contracted to build 26 km section of the highway, said they need at least 500 workers but with many having left before the lockdown, only 120 are living at the site. Many others, who had gone home for Holi, have not returned.

The company’s staff, hailing from across the country, have been provided accommodation at air-conditioned container cabins. The contracted daily-wage labourers (earning an average of Rs 400 to Rs 500) live in makeshift asbestos shanties at the construction sites.

Among them is Rita Danve, who came to Mangaon from Bhusaval (about 540 km away) leaving her three children with her parents. “As soon as the trains start again, I will go home,” said Danve, who has been at the site for over nine months with her husband Laxman.

Areas like Panvel and Uran that are in close proximity with the Mumbai Metropolitan Region are also home to thousands of migrant workers. In Raigad, 36,879 migrant workers are staying at 327 locations, District Collector Nidhi Choudhari said. 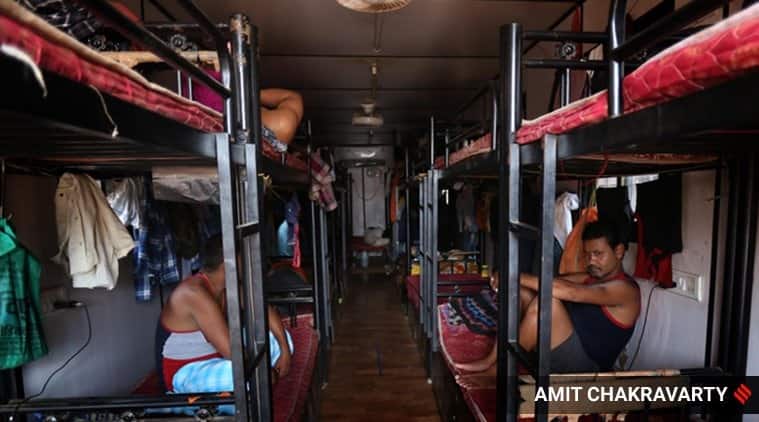 The contracted daily-wage labourers (earning an average of Rs 400 to Rs 500) live in makeshift asbestos shanties at the construction sites.

After news and videos of thousands of migrant workers gathered at Mumbai’s Bandra station on April 14 were widely shared, officials said it had brought anxiety to many migrant workers in other districts as well.

Choudhari, however, said that they decided not to uproot workers who stayed on construction sites. The administration provides them with dry ration, soaps and sanitisers. She said that workers lived in groups of people hailing from the same state or village and scattering them in camps would have only caused more stress to them.

“Even the organisations and NGOs that supply cooked food to some of the camps, we told them to take small steps to ensure that migrant workers feel more at home. Like serve chokha to Bihari workers, serve brinjal with khichdi. In Panvel, we installed a TV in a camp so that they can watch movies in their language,” said Choudhari.

A car light shone on eight persons resting their heads on their bags along the highway near the Kharsai village in Raigad at dawn. Going without water the entire night, the four men, three women and a three-and-a-half-year-old child, were lying down to rest their bodies that had braved about 220 km on foot from Virar, Mumbai’s far-flung suburb, to their village in Gondghar in Raigad. In another time, they would travel the same distance in a bus in eight hours.

The child was asleep on his mother’s stretched legs, his black face mask slipping off his ear. “We have been walking for three days non stop. He kept crying and refusing to walk,” said Akanksha Kap, the boy’s mother. The family had only four kilometres more to walk to make it home.

“Eight of us live in one room in Virar. What kind of social distancing can we maintain? We decided to walk home… our family members in the village say we would be quarantined in the village school for 15 days. That is fine… this is home after all,” said Ankush Kap, the boy’s father who is an electrician.