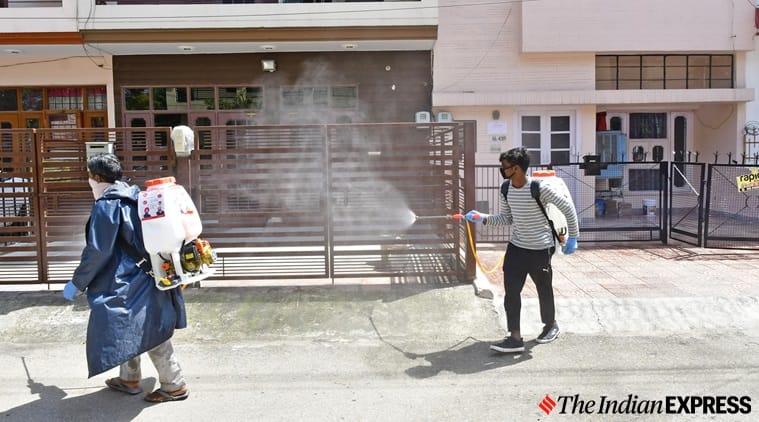 In Ludhiana, the Ramgarhia Educational Council too has opened its LPG crematorium opposite military complex at Dholewal for unclaimed bodies of coronavirus infected bodies. (Express Photo by Jasbir Malhi)

Nine people tested positive for coronavirus in Punjab on Sunday, taking the total cases in the state to 170. With seven new cases, including one case involving a woman who tested positive posthumously, Jalandhar reported the highest number of cases in a single day on Sunday. Other cases reported in the state included two from Mohali.

The state has identified 17 hotspots where two or more confirmed cases have been found.

A 42-year-old woman from the Jalandhar’s Old Sabzi Mandi area had tested positive on Friday. Five of her family members tested positive on Sunday. Health officials said she had no history of international travel, and contact tracing has so far not revealed the likely source of the infection. Samples of 13 of her contacts were taken on Sunday evening.

A Tablighi Jamaat member from Kartarpur’s Billa village tested positive, while another man who accompanied him to the Nizamuddin congregation tested negative. In these cases, another 42 samples of the positive Tabligh member’s contacts were collected on Sunday.

A 50-year-old woman from village Kotla Heran of Shahkot, who was brought dead to the Civil Hospital on April 9, has been declared as coronavirus positive. Her report came positive Sunday, three days after her death and cremation. It is learnt that her husband returned from Dubai on March 15. “Villagers were not aware of her being positive and attended her cremation,” said Sarpanch Ravinder Singh, adding that the woman was admitted to a private hospital for six days, so its staff is also being examined.

The administration has sealed the village and mass sampling will be done here.

In Phagwara, following the positive case of a girl student from the hostel of Lovely Professional University (LPU), the Health Department, after sealing the university campus Saturday night, has taken the samples of 27 primary contacts of the girl. A contact list has been prepared and has 150 persons, including 68 students, medical staff, mess staff, hostel warden. Most of them were staying in the same hostel building where the girl was putting up.

Her two roommates — one from Telangana and other from Chhattisgarh who had left the hostel on March 15 for their home states — have also been contacted.

Around 3,000 students and staff members of LPU are staying in various hostel buildings of the university inside the campus.

“We have sealed the university and asked that no one will come outside,” said Deputy Commissioner, Kapurthala, Deepiti Uppal, adding that the girl has no recent travel history.

Sources in the Health Department said they have come to know that some students of the university had gone for a vacation to Mussoorie, but university authorities are not parting with the information of these students.