How does a containment plan work and what will happen in the UT? 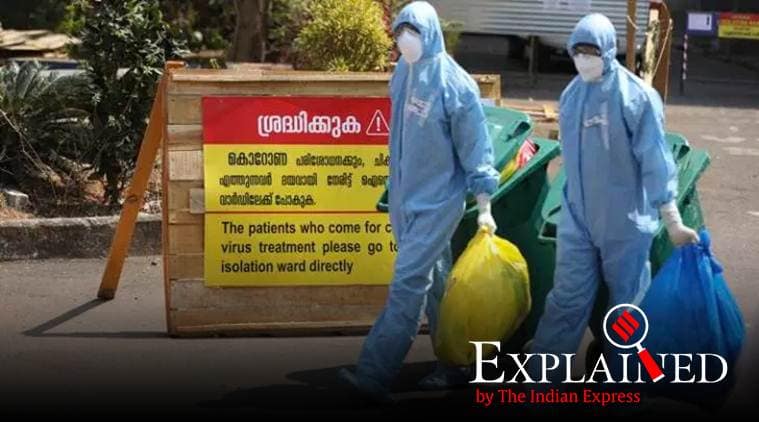 Chandigarh has reported 21 cases and thus, to focus attention on districts/cities reporting large number of cases/high growth rate, Chandigarh has been included in the list. (Representational Photo)

As cases of local transmission start surfacing across the country, PALLAVI SINGHAL takes a look at the containment plan that the Centre advised to the states and UTs.

What is a containment zone?

A containment zone has been defined based on the index case / cluster, which will be the designated epicentre, the listing and mapping of contacts, geographical distribution of cases and contacts around the epicentre and the administrative boundaries within urban cities /town/ rural area.

The RRT (Rapid Response Team) has been advised to do a listing of cases, contacts and their mapping. This is to help in deciding the perimeter for action. The decision of the geographic limit and extent of perimeter control is to be the prerogative of the state government.

What is being done at the local transmission stage?

Active surveillance in containment zones is being conducted with contact tracing within and outside the containment zone as well. Laboratory capacity for testing all suspect samples is being expanded and surge capacities for isolating all suspect / confirmed cases for medical care is being established. Intensive risk communication via door to door surveys by Asha workers has been implemented across country.

What is cluster containment strategy?

Cluster containment strategy refers to contain the disease within a defined geographic area after early detection, breaking the chain of transmission and preventing its spread to new areas. This would include geographic quarantine, social distancing measures, enhanced active surveillance, testing all suspected cases, isolation of cases, home quarantine of contacts, and social mobilisation to follow preventive public health measures.

What are the factors affecting cluster containment?

Size of the cluster, time since first case/ cluster of cases originated, detection, laboratory confirmation and reporting of first few cases, active case finding and laboratory diagnosis, isolation of cases and quarantine of contacts, geographical characteristics of the area, population density and their movement (including migrant population), resources that can be mobilised swiftly by the state government and the ability to ensure basic infrastructure and essential services are the variables that the Centre has listed to make a containment operation successful.

What is a buffer zone?

What will be the perimeter for buffer zone radius?

In case of a small cluster in closed environment such as in schools, military barracks, hostels or a hospital-the containment zone will be the building itself. A buffer zone of additional 5 Km radius will be identified.
In case of a single cluster in a residential colony, the containment zone would be the administrative boundary of the residential colony and a buffer zone of additional 5 Km radius.

When multiple clusters in communities (residential colony, schools, offices, hospitals etc) within an administrative jurisdiction are identified, the containment zone would be administrative boundary of the urban district and a buffer zone of neighbouring urban districts as has been done for Jawaharpur in Mohali-Punjab.

If multiple clusters spatially separated in different parts administrative districts of a city originate, the containment zone will be the administrative boundary of city/ town and congruent population in the peri-urban areas as the buffer zone.

When a cluster originates in a rural setting, there must be a 3 Km radius of containment zone and an additional 7 Kms radius of buffer zone.

How will active, passive surveillance be conducted in such zones? How much movement is allowed?

For active surveillance- the residential areas will be divided into sectors for the ASHAs/Anganwadi workers/ANMs each covering 50 households (30 households in difficult areas). Additional workforce will be mobilised from neighbouring districts (except buffer zone) to cover all households in the zone. This workforce will have supervisory officers (PHC/CHC doctors) in the ratio of 1:4.

For passive surveillance, all health facilities in the zone will be listed as a part of mapping exercise. All such facilities both in the government and private sector (including clinics) will report clinically suspect cases of COVID-19 to the control room at the district level.

How many types of hotspots are there?

What does Chandigarh falling under ‘Large Outbreak’ zone mean?

Chandigarh has reported 21 cases and thus, to focus attention on districts/cities reporting large number of cases/high growth rate, Chandigarh has been included in the list.

The geographic area will be mapped for cases and contacts to define operational area. If such data is not readily available- whole city will be termed a containment zone and neighbouring districts- buffer zone.

The people of Chandigarh will be barred vehicular movement including personal as well as public Influx of population will be checked. Borders will be sealed Only 1 or 2 arterial roads into containment zone will be open.

For all the latest Explained News, download Indian Express App.