Depression, the blight that has its talons sunk across the world, can melt the doughtiest of per­­sons. Only a few emerge stronger, but it takes mental toughness and doggedn­ess. Sarfaraz Khan and younger bro­­ther Musheer, the young cricketers of Mumbai, seem to have those qualities in abundance. They not only overcame a tormenting 2019 but notched up career best performances in the season that ended in March.

Even as Sarfaraz was serving a one-year cooling-off period in 2018-19 season to qualify to represent Mumbai again on his return from Uttar Pradesh after five years, the Mumbai Cricket Association (MCA) banned Musheer for three years for indiscipline. As the blues slowly consumed Musheer, their father-cum-coach Naushad too succumbed to depression. The three faced a bleak future in cricket—the only thing the family lives for. But, guided by a doting Naushad and some psychiatric therapy, how the two boys have returned with stronger res­olve and renewed vigour! They scored runs and dismissed batsmen almost at will, playing with steely determination. Hard-hitting middle order batsman Sarfaraz, 22, finished the Ranji Trophy tournament with the highest average in India—154.66—while plundering 928 runs in six matches, comprising a fabulous, unbeaten triple and a double century. Sarfaraz, who had hammered a record 439 for Rizvi Springfield in a Harris Shield inter-­school match in 2009, chipped in with cameos for the Mumbai under-23 team for the CK Nayudu Trophy.

“He has had an outstanding season. There’s no doubt about it. His comeback was due to his mental toughness and he has worked hard at his cricketing skills as well. His father, too, has worked hard. Both Sarfaraz and Musheer are talented,” former India and Mumbai captain Dilip Vengsarkar tells Outlook.

In 2015, a year after a good performance at the under-19 World Cup and Royal Challengers Bangalore (RCB) buying him for Rs 50 lakh, Naushad had taken a transfer for Sarfaraz, still a minor, to Uttar Pradesh due to lack of opportunities in Mumbai. But the stint in Uttar Pradesh was unsatisfactory. Form deserted him too and a serious knee injury just before 2017 IPL added to his misery. The consolation: RCB kept faith in Sarfaraz and retained him for Rs.1.75 crore at the January 2018 auction. Finally, a wiser Naushad brought Sarfaraz back to Mumbai in 2018, but he had to sit out the cooling-off period to be eligible to play in 2019-20. 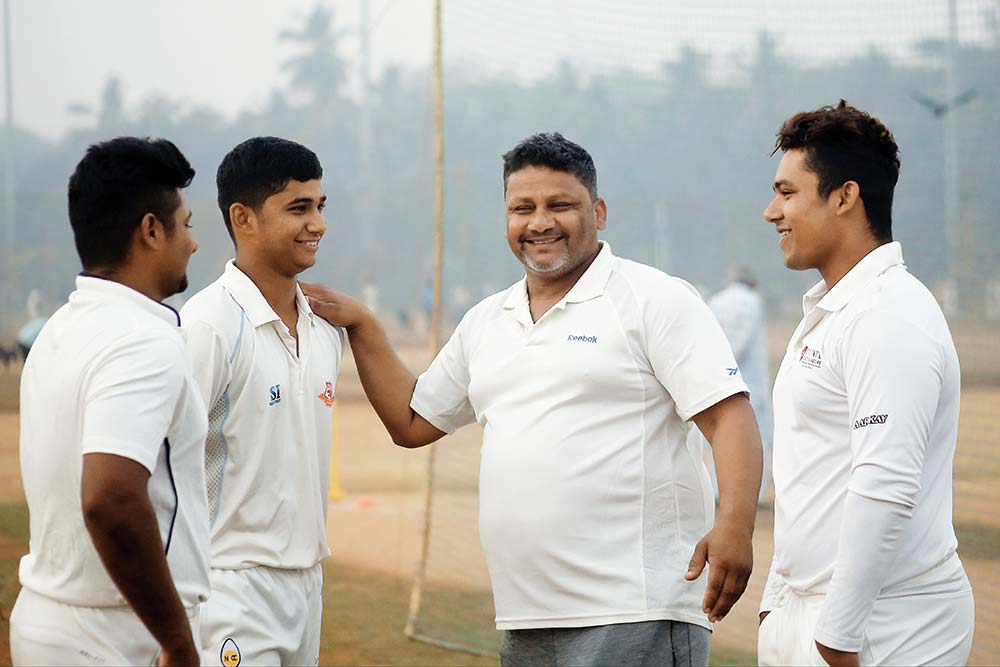 Naushad Khan with his sons, Sarfaraz (from left), Musheer, and Moeen, a trainer.

Former India wicket-keeper Kiran More was impressed too. “Sarfaraz is an exceptional talent. This season was a game changer for him. He has gone through hell, so he’ll now be prepared to take on any challenge…. He’s definitely India material,” More tells Outlook.

Naushad, who motivates his sons by reading couplets from famous ghazals, says the turnaround is due to a change in Sarfaraz’s approach. “For example, he used to dread getting out in the slips. Now he doesn’t, as he chooses his strokes and tries to play the ball along the ground,” he says.

Sarfaraz, rather nonchalantly, des­cribes his game thus: “While playing red ball cricket I try to be patient. If you stay at the pitch, you would know what shots to play. I play my natural game in white ball cricket. But, even in longer versions, after completing a century I switch to my natural game. Simple.”

Both Sarfaraz and Musheer had to seek psychiatric help. Both came out stronger.

It was, of course, not simple—not just for injury-hit Sarfaraz, but also for Musheer and Naushad. The MCA had handed its under-16 captain Musheer, who was yet to turn 14, a three-year ban for ‘indiscipline’ during a Vijay Merchant Trophy match against UP in January 2019. “I expected a lot from my sons, that’s why I went into depression. When Sarfaraz came back from UP, I got depressed as I wondered about his car­eer after his cooling-off period—will Mumbai pick him again?” confesses an emotional Naushad.

Sarfaraz slew all doubts with his prolific bat. The icing on the cake was left-arm spinner Musheer capturing 30 wickets at a miserly average of 9.36 in the under-16 Vijay Merchant Trophy on his comeback after his ban was reduced to 11 months following an apology. The diminutive tweaker, who turned 15 on February 27, bagged two 10-wicket match hauls—one in the final against Punjab–in four matches to propel Mumbai to the title triumph. Overall, he captured three five-wicket hauls, and scored 125 runs. In the under-19 Cooch Behar Trophy, he scored 84 runs and took a solitary wicket in two matches, as Mumbai lost to Vidarbha in semis in which he scored a fine 57.

During their period of crisis last year, Naushad, a former cricketer, took his sons to play matches in Bangalore, Hyderabad, Moradabad, Meerut, Mau and Azamgarh, to keep their hands in. “It was a tough period, but a popular couplet of Nida Fazli inspired me: Safar mein dhoop toh hogi jo chal sako to chalo, sabhi hain bheed mein, tum bhi nikal sako to chalo, yahan kisi ko koi rasta nahi deta, mujhe girake agar tum sambhal sako to chalo (there will be heat and roadblocks in the journey; you venture out if you can withstand these hurdles),” he recites.

Both Sarfaraz and Musheer had to seek psychiatric help. In 2011, when a Mumbai school wrongfully, and unsuccessfully, accused Sarfaraz of age man­ipulation, he slipped into depression, and Naushad had taken him to a psychiatrist. Last year, Musheer also saw a psychiatrist in Mumbai, before coming out stronger. “Depression is the single largest illness in the world that hits every social stratum. We’ve to recognise mental health in sports to help athle­tes bounce back,” Dr Samir Parikh of Delhi’s Fortis Healthcare tells Outlook.

About his last year’s cooling-off period, Sarfaraz says, “I knew the opportunity would come, and for that I’d have to be prepared. During that period, I got to understand and know myself.” Their troubles now a distant cloud, Sarfaraz and Musheer are well on their way.