A tweet sent out late on Friday evening from the Indian Premier League account (@IPL) has left the tournament’s high-powered governing council wondering as to who unilaterally decided that the tournament’s sponsorship deals will be reviewed in the wake of the India-China standoff in Ladakh.

With pressure mounting on boycotting Chinese goods, the Board of Control for Cricket in India (BCCI), which owns the cash-rich IPL Twenty20 league, sent a tweet at around 10:45 PM on Friday saying: “Taking note of the border skirmish that resulted in the martyrdom of our brave jawans, the IPL Governing Council has convened a meeting next week to review IPL’s various sponsorship deals.” 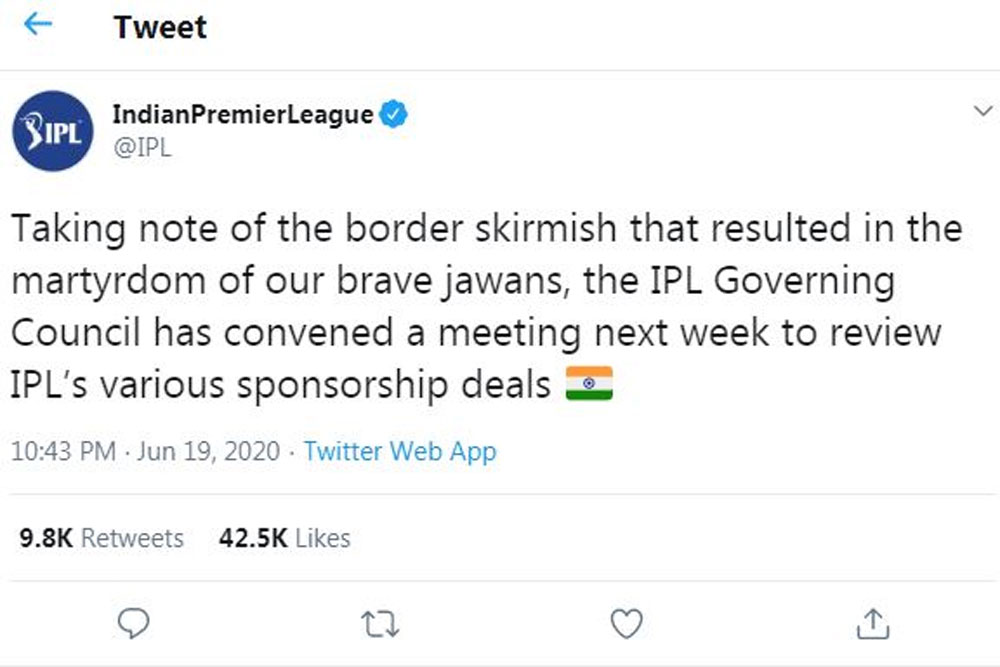 Outlook spoke to at least two key members of the IPL governing council who said that they had no knowledge that such a tweet was being sent out. The tournament’s chairman Brijesh Patel, the Chief Operating Officer Hemang Amin and the BCCI CEO Rahul Johri were all kept in the dark.

“It certainly was an unilateral decision. BCCI is being run like this for months now and there is no transparency. Seems some officials are under pressure from the government to renege on the sponsorship deals with Chinese brands or companies that receive Chinese funding,” said a governing council member on condition of anonymity.

Chinese mobile phone brand VIVO are the title sponsors of IPL. It has a whopping INR 2,200 crore deal over five years (2018-2022) with the BCCI.

The IPL, one of the top five sports properties in the world in terms of global broadcast rights valuation, also has solid links with online fantasy league platform Dream 11 and e-commerce company Paytm. Both Dream 11 and Paytm receive funding from Chinese companies like Tencent and Alibaba, respectively.

“We only got to know from online reports and Twitter that there will be some review. We could not reach the secretary, president or treasurer. May be, they have heard something from the government. Public pressure can’t be ignored,” said the governing council member.

The BCCI is in a unique position like never before. Secretary Jay Shah’s tenure ended in May first week, Sourav Ganguly’s stint as president is going to end in July, vice-president Mahim Verma has quit and joint-secretary Jayesh George is virtually defunct. Only treasurer Arun Singh Dhumal is ‘officially’ active as per the new BCCI constitution.

On Wednesday, Dhumal told Outlook: “BCCI will be open to reviewing all sponsorship deals if the government says so. The nation comes first.” Dhumal is the brother of BJP minister and former BCCI president Anurag Thakur.

Shah, the son of Home minister Amit Shah, and Ganguly have filed an application in the Supreme Court to let them complete their three-year terms in BCCI. The apex court is in no mood to list their appeal.

The IPL governing council members are not sure when the sponsorship review meeting will happen. “We are waiting to hear from the BCCI. Neither the CEO nor the IPL COO know anything,” said a member.