During COVID Times, Why Gold Will Revive Household Fortunes And Small Enterprises

In the Hindu calendar, Akshay Tritiya is considered an auspicious day for people to buy gold. But this year the COVID-19 lockdown has dampened the demand for the precious metal. But given its resilience as a safe-haven asset, experts are forecasting that prices may cross Rs 5,000 a gram by the end of 2020.

Like crude oil, in case of gold too, India is a net importer and the currency movement plays a significant role in the determination of local prices. As most economic activities came to a halt due to the lockdown, the Indian rupee has depreciated a lot and is weaker than before vis-a-vis the US dollar. And it is expected to weaken further over the rest of the year as the effects of the pandemic unfold gradually. The weaker rupee is a key factor in gold prices moving up.

In 2019, around 33 to 35 tonnes of gold was sold on Akshaya Tritiya (May 7). In the past two months, import of gold to India has dipped more than 73 per cent on a year-on-year basis. This March, India imported just 25 tonnes against around 94 tonnes in March 2019. Last year’s Akshaya Tritiya saw gold being traded at Rs 31,500 per 10 gm and gave almost 47 per cent returns to gold investors. Now the price has gone up to Rs 45,790 (as on May 4). The gold trend is still positive on the back of uncertainty and lower global growth forecast. The physical demand this year is likely to be hit due to the lockdown as well as the higher prices.

There are several indications and reasons why gold prices are expected to rise in the immediate to medium term and this surge in prices is important as it gives an indication of how tough the economic situation will be during the period. Due to higher prices, the physical demand for gold has declined, but the investment demand for the yellow metal has risen due to rising institutional demand. 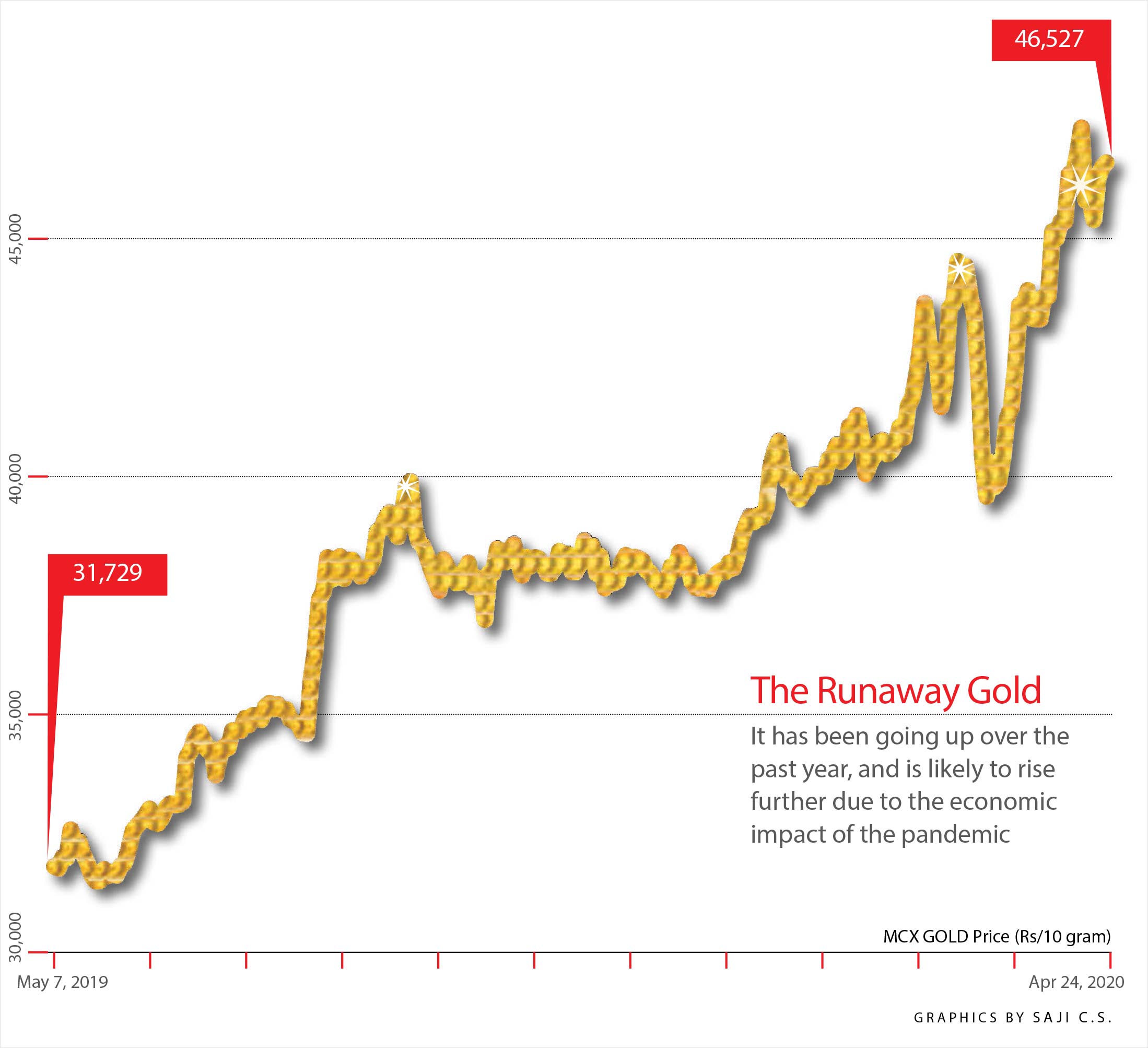 According to World Gold Council (WGC), Indian demand for January-March 2020 declined by 36 per cent in volume terms to 102 tonnes, while in value terms it declined by 20 per cent and 22 per cent in rupees and US dollars, respectively. During the quarter under review, jewellery demand for gold in Asia’s third largest economy declined by 41 per cent to 73.9 tonnes, while investment demand declined by 17 per cent to 28.1 tonnes. According to the WGC, the drop in physical demand for the yellow metal was attributed to a combination of factors such as high and volatile prices, economic uncertainties and, towards the end of the quarter, severe logistical freeze due to the lockdown.

However, the total gold recycled in India in the quarter was 18.5 tonnes, up by 16 per cent from 16.1 tonnes in the corresponding quarter last year. “This increase was expected due to the lifetime high prices of gold,” says P.R. Somasundaram, managing director of the WGC India chapter. “Recycling and collateralised loans against gold are expected to grow exponentially in the next few quarters as the lockdown’s immediate economic impact becomes evident and, hopefully, fundamental reforms follow, easing business sentiment.”

With the pandemic bringing the world economy to a near-halt and a possible contraction ahead, gold seems an attractive option as a hedge against uncertainty and a good investment vehicle in the current scenario. Moreover, as the central banks of developed nations have been on an easing spree to fight the contraction, the fiat currencies are expected to face pressure in the near future. “In such a scenario, gold is likely to emerge as a safe-haven asset,” says Pankaj Bobade, head of fundamental research at Axis Securities. “One should have a part of the portfolio invested in Gold ETF as an insurance against the possible volatilities expected in the global financial market. So, if you are looking to buy gold, Gold ETF would be a good option from a long-term perspective.”

Governments across the globe have announced various stimulus packages and are in process of bringing in more. Global interest rates have fallen sharply as global central bankers have cut around 750 basis points of rates to combat economic slowdown. The major central bankers are forced to adapt accommodative monetary policies and support the crumbling economies with everything they can, which includes quantitative easing too. Talk of helicopter money is not rare anymore.

Although physical demand for gold remains weak in key consuming nations like India and China, it is strong in the US, Canada, Australia, etc. The fact that NYMEX has gone for a provision of negative pricing mechanism for WTI oil underscores the severe distress in the economy, huge volatility amid unpredictability, and an extremely grim overall situation. “The COVID-19 contagion doesn’t appear to be peaking anytime soon and weak currencies are likely to favour gold prices as buying gold would provide a hedge against weakness in the currencies,” says Praveen Singh, AVP-Fundamental Research, Sharekhan by BNP Paribas. “Although huge volatility is expected, we expect gold price prices to rise to US$2,000 in the medium term, and thus suggest buying at the dips.”

Real yields are a strong driver of gold prices, now in negative territory. Inflows into Gold ETFs are on rise. Asset managers too are increasing their long-term gold allocations. In dollar terms, gold is up 14 per cent year till date (YTD) and up 34 per cent over the past 12 months. “Safe-haven demand always supports the gold prices,” says Anuj Gupta, DVP-Commodities & Currencies Research, Angel Broking. “This time gold is trading on higher levels (recently gold touched the lifetime high of Rs 47,327). Technically, we recommend waiting for some correction till Rs 38,000-40,000 to buy gold for the target of Rs 50,000-52,000 in gold prices. In the international market, gold may test $1,780-1,800 per troy ounce (1 troy ounce = 31.10 gm). Closing above $1,800 levels may lead this rally towards $1,880-1,950 levels.”

Gold is looked upon as a critical barometer during uncertain times in the economy. All major central banks have embarked on a “once in a lifetime” monetary expansion policy that will radically increase money supply. COVID-19 has resulted in implied volatility at historical highs. “Price outlook on gold remains positive with prices expected to rise significantly to meet the investor demand as a safe-haven asset and due to depreciation of the rupee,” says Shekhar Bhandari, senior executive vice president (precious metals), Kotak Mahindra Bank. “We can expect gold prices to continue the rally, to settle above Rs 5,000 per gm by the end of this financial year, primarily driven by the COVID-19 crisis and its significant impact on the global economy.”

The rising prices will not only benefit the investors who begin their investment journey at every dip in prices to reap the benefits of higher prices at the end of the year. It will also benefit economies like India and China, the biggest importers of the precious metal, as due to higher prices, their physical demand may take a hit, leading to lower imports. This will ease the burden on India’s current account deficit and support the Indian currency. In that scenario, gold may become a tool for revival of many small and medium enterprises and household fortunes.