Do Virtual Courts Reserve Access To Justice Only For The Privileged Few?

At 8.07 pm on April 23, Arnab Goswami, the editor and owner of Republic TV, moved a petition in the Supreme Court demanding an urgent hearing to quash multiple FIRs filed against him by Congress leaders in various states. The FIRs had sought Goswami’s arrest on various grounds, including inciting communal hatred and making derogatory remarks against interim Congress chief Sonia Gandhi. The SC Registry scrutinised Goswami’s petition post-haste and listed it for hearing before a two-judge bench of Justices D.Y. Chandrachud and M.R. Shah at 10.30 the next morning.

With the SC having laid down standard operating procedures for listing and hearing only extremely urgent cases through video conferencing during the ongoing lockdown, the alacrity with which Goswami’s petition was heard raised eyebrows. More so, since scores of petitioners who sought a hearing by the SC much before Goswami continued to wait. Advocate Reepak Kansal filed a complaint with the secretary-general of the SC, alleging “discrimination” and demanded corrective steps against the “pick and choose policy adopted by the registry”. Kansal tells Outlook, “I had to wait for 11 days to have my matter (regarding supply of rations to stranded migrant workers during the lockdown) heard but Goswami’s case was listed for hearing through a supplementary list released by the registry within an hour of his lawyers filing the plea.”

The past month has demonstrated afresh the misery of the poor as well as migrants who have borne the brunt of the devastating economic fallout of the coronavirus crisis. Add to this the Muslim community that continues to be blamed for the spread of the virus from the Tablighi Jamaat. If the lockdown-fired cauldron of injustices isn’t bubbling yet, there are other examples to consider too: police excesses against those who “defied the lockdown”; doctors who pleaded helplessly for PPEs; job losses and pay cuts in the private sector despite PM Narendra Modi’s request against it; government servants pressured to contribute from their salaries to the PM-CARES fund. And Kashmiris, for whom the lockdown is only a continuation of curbs on civil liberties and the Anand Teltumbdes, Umar Khalids, Safoora Zardars, Masrat Zehras and Gowhar Jeelanis who must battle charges under the draconian UAPA. 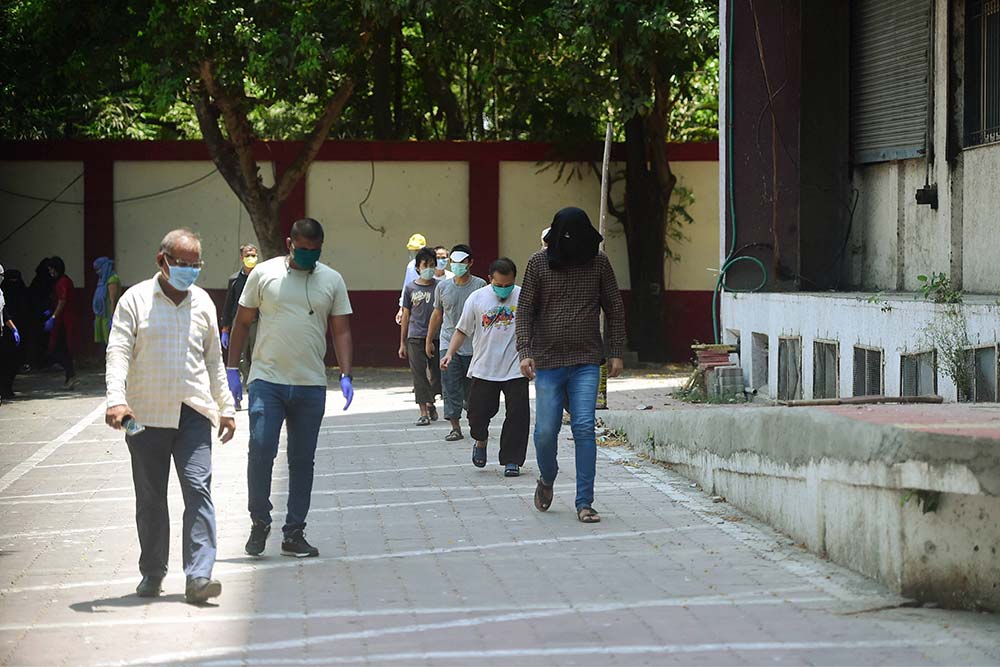 Ten Indonesians, arrested for attending the Tablighi Jamaat in Delhi, are produced before a magistrate’s court in Bandra.

The role of the judiciary as parens patriae for each of these citizens cannot be emphasised enough. Therefore, the arbiters of justice must adapt swiftly to a lockdown and post-lockdown situation with greater swiftness than other pillars of democracy.

The SC was, in a sense, the first ins­titution that realised the need for a paradigm shift in its functioning. A day ahead of PM Modi’s announcement for a countrywide lockdown on March 24, Chief Justice of India S.A. Bobde decided that the court would conduct hearings through video conferencing. The high courts soon followed suit, though a majority of district courts across the country continue to struggle.

With the lockdown extending beyond its initial deadline of April 14, the SC had, as on April 26, been operational for 17 working days, heard 593 cases (203 of which were connected matters), pronounced 41 judgments, decided 84 review petitions and convened 87 benches. A laudable feat? Perhaps another data set would put this in perspective. As on March 1 this year, the total number of cases pending bef­ore the SC stood at 60, 649—over 550 of these are constitutional matters (inc­luding connected cases) listed before benches of strength varying between five and nine judges. This massive backlog is despite the fact that the SC today has 34 sitting judges—its highest sanctioned strength in 70 years. Senior adv­ocate Menaka Guruswamy adds another dimension, explaining, “On an average Monday, about 70 cases are heard in each of the 14 SC courtrooms and so even without factoring in cases heard on other days, there are 980 cases heard on just one day”.

The wheels of justice are infamous for rolling ever so slowly in India. The massive backlog of cases across all levels of the judiciary—3,22,74,096 cases at the district and taluka level courts and another 48,16,011 cases across high courts  are a testimony to this. It is, thus, surprising that CJI Bobde, in an interview to The Hindu on April 26, claimed that “there is much less pressure on the courts (during the lockdown) as very few actions are being taken…which normally generate litigation.” Given the staggering backlog, the assertion—by the CJI no less—of “much less pressure on the courts” sounds like a cruel joke on lakhs of waiting litigants. Indeed, of the 3.22 crore cases pending across district and taluka courts, over 27 lakh cases have been pending for over 10 years, while over 8.76 lakh fresh cases were filed last month alone. The sharp decline in matters being heard by the SC or high courts presently and the total shutdown in lower courts deprived of video conferencing infrastructure threatens to constrain access to justice even further. This merits the question if the courts could have utilised this period of “less pressure” to dispose of cases pending only for pronouncement of judgment. Arghya Sengupta, research director, Vidhi Centre for Legal Policy, tells Outlook, “At the trial stage or in cases where evi­dence has to be led, virtual hearings are not viable but courts could have utilised this period better by delivering judgments in cases where all other stages have been completed… doing so would have reduced the backlog.” 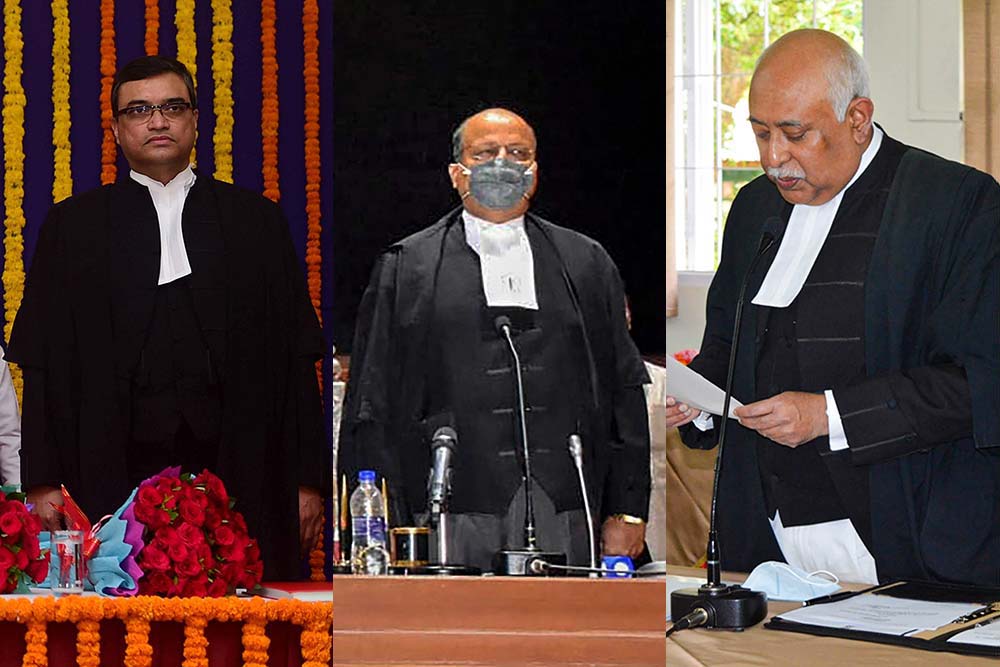 The Bombay, Odisha and Meghalaya high courts got new Chief Justices in Dipankar Datta, Mohammad Rafiq and Biswanath Somadder respectively, who took oath during the lockdown.

Much of the present discourse over how the judiciary is coping under the lockdown has revolved around the promptness with which CJI Bobde dir­ected hearing of extremely urgent matters through video conferencing and the rapidity with which HCs replicated the move. Yet, every plaudit lavished upon virtual courtrooms has been qualified with the dire need to make the system more efficient, transparent and accessible. Indeed, in light of Goswami’s case, a major criticism has been about hearing only matters of “extreme urgency”. Senior advocate Kapil Sibal tells Outlook that the apex court must lay down “clear and precise processes for identifying urgent matters so that court gossip over arbitrariness of listing matters is contained”.

“Clear processes to identify urgent matters needed so that court gossip over arbitrariness is contained.”

Virtual hearings have also been plagued by technical snags. “Thrice during my submissions, the judges (Justices N.V. Ramana, S.K. Kaul and B.R. Gavai) told me that I was not audible; later my connection got disconnected…by the time I logged in again, the judges were already reading out their order,” says Kansal. The SC hearings use the VIDYO App hosted by the National Informatics Centre. Sengupta says the “lack of uniformity” in the platform that lawyers must acc­ess across all courts for video conferencing too needs to be resolved if virtual courtrooms are to become a regular feature. “The SC currently uses the VIDYO App while platforms like Zoom, WhatsApp and Webex are being used in some high courts. In J&K, the continued suspension of 4G services has made hearings on video conference impossible,” Sengupta says. There have also been some unintended but hilarious instances­­—on April 24, a lawyer appeared for a video conference hearing before Justice S.P. Sharma of the Rajasthan HC’s Jaipur Bench wearing a vest. The judge reprimanded him for not being in uniform and adj­ourned the case till May 5.

These glitches, however, sound like lesser problems when compared with the pressing need for other systemic reforms. Senior advocate Abhishek Manu Singhvi says the COVID-19 crisis has highlighted the “need for innovations and new paradigms in the administration of justice” but rues absence of the best technology and equipment available to facilitate daily hearings by all sitting judges of the SC.

With only limited benches presiding over select matters daily, cases pending before constitution benches have been put on the backburner. Each of these—petitions challenging the Centre’s abrogation of Article 370, those against the controversial Citizenship Amendment Act or the clutch of petitions over gender discrimination in places of religious worship listed before a nine-judge bench—deal with substantial questions of the law and constitutionally guaranteed fundamental rights. It is worth asking how long their resolution would be held hostage to the lockdown since each of these petitions directly affect the civil liberties of lakhs of citizens as opposed to problems faced by a high-profile, pro-government editor. Guruswamy, who is appearing for petitioners in two constitution bench matters—the Sabarimala and CAA petitions—tells Outlook, “I am sure the judges are thinking about how to res­ume hearing these cases under the current circumstances.” Sengupta bel­ieves that a way out could be to ask all lawyers to give written submissions in advance and then be allotted strict time slots to put forth oral arguments via video conferencing. 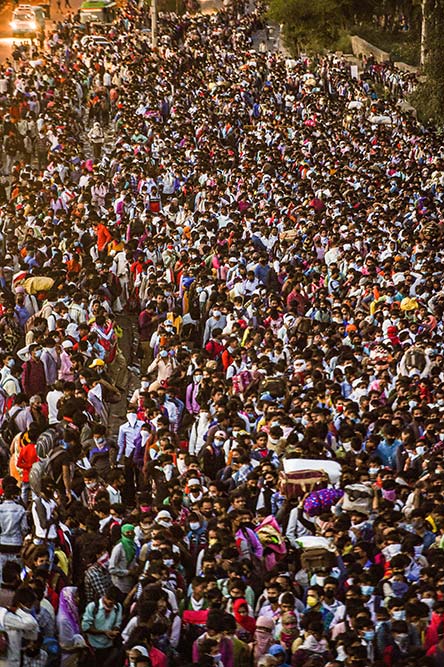 Tens of thousands of migrant workers have been left stranded—without food, shelter, cash, jobs—during the lockdown.

Legal luminaries caution that even if the lockdown ends, or is eased, on May 3 it would take “months before complete normalcy ret­urns to court functioning”. Sibal says, “Unless we develop herd immunity, regular functioning of courts will be handicapped because courtrooms are extremely crowded; with the risk of a highly contagious virus, many judges, lawyers and petitioners may not want to be present for hearings”. His fears are only too genuine: the deadly virus has made its debut in the hallowed precincts of the apex court, with a staffer testing positive for COVID-19 on April 27 and two registrars being asked to self-isolate. Sibal warns that the challenge will be enormous at the district and lower courts, particularly in remote areas.

A senior advocate tells Outlook that the absence of concern over the lockdown’s impact on lower courts and the shrill advocacy for virtual courtrooms as a way of the future “smacks of an elitism typical of our justice del­ivery system which places judges and lawyers of appellate courts or the SC on a high pedestal”. The advocate adds, “Given high levels of corruption and an equally poor emphasis on implementation of schemes,” it is no surprise that “allocations worth over Rs 1,000 crore” made over the years for digitisation of court records and setting up digital infrastructure at the lowest level of our judiciary haven’t yielded desired results. “If you visit a lower court in Chhattisgarh, Odisha, Haryana or the Northeast states, you’ll see that neither lawyers nor judges can operate a computer properly. You can’t just flip a coin and move to virtual courtrooms,” he adds.

Could the courts not use this period of ‘low pressure’ to dispose of cases pending pronouncement of judgment?

What is also perplexing is how proceedings in over a dozen tribunals have come to a grinding halt during the lockdown despite these judicial bodies being equipped with video conferencing infrastructure. Bhopal-based lawyer Yadvendra Yadav says, “The central zonal bench of the National Green Tribunal had been hearing matters through video conferencing for nearly two years, but stopped functioning since the lockdown”. Yadav, also a counsel for the MP government, says the public will pay a huge price for this stalemate as the NGT had stayed work on some key government-funded projects and with proceedings now on hold, cost escalation for these projects would eventually be passed on to common citizens.

The judiciary had a golden opportunity—it still does—to envisage a justice delivery system that could function unhindered at all levels during any emergency. The lopsided approach of higher echelons of the judicial system, which account for just about 15 per cent of all litigation and 13 per cent of the backlog, however, places justice under lockdown. A swifter reprieve for Goswami while others wait in virtual queues deepens this perception.