Ram Pukar Pandit has at last reunited with his family in Bihar, but it is not the homecoming he was looking forward to. An abiding sense of loss and guilt continues to haunt him ever since he reached his village, distraught and heartbroken—barely a few days after his 11-month-old son, whom h e had never seen, succumbed to a stomach infection.

The 38-year-old from Basahi village under Cheria Bariarpur block of Begusarai district is yet to reconcile to the fact that he was not around when his toddler breathed his last or, worse, when his body was flown quietly into a nearby river by his family members in his absence.

Pandit’s son Ram Pravesh, who was born last year, had brought happiness to his family comprising his wife Bimal Devi and three daughters, the eldest nine years old. But he had never seen his only son, let alone held him in his arms. His wife was eight months pregnant when he had to suddenly leave to work in Delhi last year. As the sole breadwinner of his family, he knew that he did not have the option of staying back. He had to earn every day to support himself and his impoverished family. Since he was not in the village at the time of his son’s birth, he did not even know what he looked like.

Busy as he was, working day in and day out as a daily-wage labourer at a construction site, he wanted to save some money before returning to his village and see his son. He wanted to go back before Holi earlier this year, but an ongoing construction project put paid to his hopes. And when all activity suddenly stopped due to the lockdown from March 25, he was confined to his room, which he shared with others. As the lockdown was ext­ended in the weeks to come, his roommates began to leave one after another and he found himself all alone, with no money to pay the monthly room rent of Rs 6,000. It was at this juncture that he came to know that his son was not keeping well. After receiving an SOS from his wife, he rushed out of his house, panic-stricken, intending to join the migrants who were out on the highways, marching to their respective states on foot.

He had no idea at the time that the distance between Delhi and his village in Begusarai was not less than 1,200 km. “My only thought was I would cover the distance to save my ailing son,” he says, “Since there was no train or bus available during the lockdown, I had no other option anyway. I thought I would reach my village in a few days. But officials did not allow me to proceed beyond the Delhi-UP border.”

Faced with the closure of all exit routes, he got stranded hundreds of miles away from his son, whose condition was worsening by the day. On May 11, Press Trust of India photographer Atul Yadav spotted him sobbing inconsolably on Nizamuddin Bridge while talking to his wife on his mobile phone. A picture of the grief-stricken Pandit breaking down over his helplessness soon went viral, making him a poignant symbol of the migrant crisis during the lockdown. 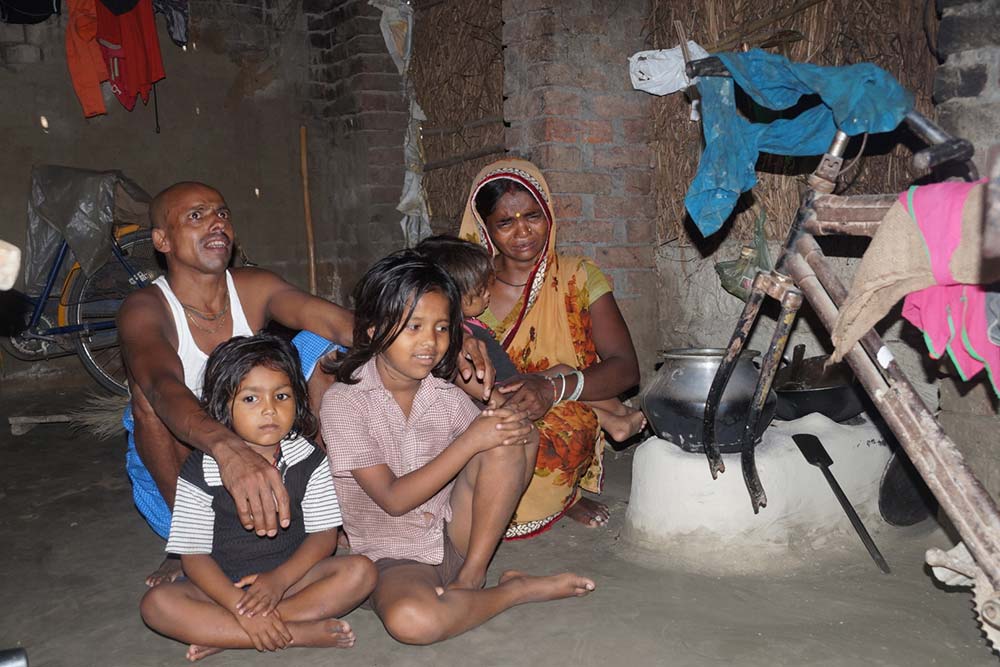 As fate would have it, a few NGO workers came to his rescue, giving him not only food and money, but also arranging for his return to Bihar on a Shramik Special train. It was, however, too late. His child had already died by then.

Purohit eventually reached Begusarai on the night of May 15 and wanted to meet his family, but he was first taken to a quarantine centre. A few days later, he was admitted to a nearby hospital for a COVID-19 test. “It was at the hospital that I could finally see my wife and eldest daughter crying from a distance,” Pandit says. “I was discharged and allowed to go to my village after the test results were negative.”

Faced with the closure of all exit routes, he got stranded hundreds of miles away from his son, whose condition was worsening.

“It never occurred to me that I would never see my son while I was leaving for Delhi last year,” says Pandit, unable to hold back his tears. “And when I finally returned, he was not around. His body had been flown into the Budhi Gandak river after his death. Due to my misfortune, I could not come back in time to even perform his last rites properly.”

Even as he continues to grapple with his trauma, Pandit now vows to never return to Delhi or, for that matter, any other place to eke out a livelihood. “I will not go anywhere, I will only stay with my family. I have three daughters to marry, but I will try to find work closer to my village.”

Pandit has since received free ration for two months from the district administration, but he does not know what is going to be his next source of income at home. “In Delhi, if I got work regularly, I used to earn around Rs 10,000-12,000 a month. I don’t know how much I will be able to earn here,” he says. “But one thing is sure—I shall not go back.”

This despite the fact that Pandit owns only eight dhur (approx 1457 square feet) of land in his village, where his ramshackle house stands. A Kumhar (potter) by caste, Pandit could never pursue his family vocation. “My father still makes pitchers, diyas etc to make ends meet, but I cannot do it due to an accident in my childhood that restricted my movement.”

Pandit hails from a poor village, which has about 30 per cent scheduled caste members. The areas surrounding his village are dependent on agrarian economy—there are no employment avenues in a government enterprise or private industry. A large number of young people, therefore, leave for big cities every year in search of jobs. Except for a few families of local landlords, most households have at least one of their members working in faraway places.

In the face of a massive reverse migration over the past few days, Bihar chief minister Nitish Kumar has appealed to all workers returning from distant cities to stay back in the state, promising to find a job for everyone according to their skills. Yet, it will be a daunting task for someone like Pandit to earn enough to support his family in the months to come. But he is ready to brave all odds. Whatever happens, he says, he does not want to pay the price for staying far from his family again.

1,400 km Razia Begum, a teacher from Bodhan in Telangana, rode 1,400 km on her scooty to bring back her son—a Class XII student—stuck in Andhra’s Rehmatabad, 700 km away. She started on April 6 and navigated via Google Maps and asking locals. She was back home on April 8.