Concerns over Gujarat app, with links to health secy, used to track cases 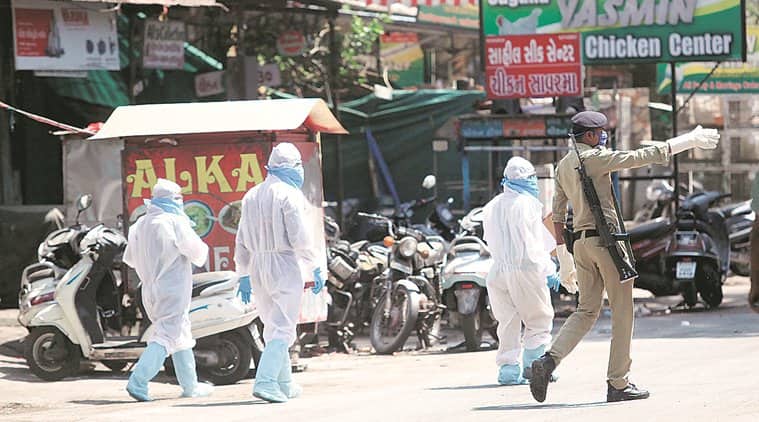 The Gujarat state health commissioner has raised concerns of data privacy, ownership and storage regarding TeCHO+ app, which is being used to upload data on COVID-19 patients.

The software for the app was developed by ArguSoft India Ltd, whose president is Ravi Gopalan, the husband of Principal Secretary, Health and Family Welfare, Jayanti Ravi.

Sources in the Gujarat government confirmed that Health Commissioner Jai Prakash Shivahare raised the concern in a communication dated April 16 regarding “TeCHO software”, saying that in order to use an upgraded version of it, “certain legal aspects needed to be taken into account like consent of the patient, ownership of the data, data storage and use. Under the circumstances, in order to increase the coverage of the TechoSoftware application, there should be an MoU with the developer of the application”.

Sources said the concern was regarding sharing of data with Argusoft India Ltd.

While Shivahare refused to comment on the issue, Deputy Chief Minister Nitin Patel, who holds the health portfolio, told The Indian Express, “I have come across some news reports regarding this but I don’t have any information.”

In response to questions sent by The Indian Express, Ravi said any allegations were “baseless” and that “as a matter of principle, I and my husband Ravi Gopalan had decided years back that all work he does for the Gujarat government would be free of cost”.

Argusoft India Ltd built TeCHO+ as a free app and its privacy policy states that the “Service is provided… at no cost and is intended for use as is”.

Incidentally, the TeCHO+ “ecosystem” includes two other apps, MyTeCHO and DrTeCHO, with tie-ups with the Gujarat government. Through MyTeCHO, citizens can register complaints or feedback regarding government health services. The service was temporarily on halt, an official said. DrTeCHO, developed post-COVID-19, is to be used by private doctors to notify SARI (Severe Acute Respiratory Infection) or ILI (Influenza Like Illness) cases.

A screenshot regarding mapping data across TeCHO platforms was shared by the Gujarat Information Department on April 12 on a WhatsApp group with journalists, showing a senior official of ArguSoft, Sethuraman Venkataraman, logged into his account, while showing a spatial distribution of cases.

Earlier, in an order on March 27, signed by the Joint Secretary, Health Department, and issued in the name of the Governor, the Gujarat Health Department had said, “concerned authorities will have to ensure that private doctors and hospitals upload all information online regarding suspected cases” on DrTeCHO+ app and “violation of this circular will result in proceedings under the Gujarat Epidemic Regulation, 2020”.

Subsequently too the government had issued advertisements regarding the app, talking of “mandatory reporting of all Novel Corona virus symptoms or Severe Acute Respiratory Infection (SARI) through DrTeCHO app” by all private doctors and private health institutions”.

The privacy policy for DrTeCHO says, “If you choose to use our service, then you agree to the collection and use of information in relation to this policy… For a better experience… we may require you to provide us with certain personally identifiable information. The information that we request will be retained by us and used as described in this privacy policy. The app does use third party services that may collect information used to identify you.”

In her statement to The Indian Express, Ravi said that when she was appointed as the Health Commissioner in 2017, she had informed the General Administration Department that her husband’s firm Argusoft had in 2013 developed the ImTeCHO app for the Gujarat government, used as a tracker for maternal and infant health.

It was officially “dedicated to the people” on October 7, 2017, by Prime Minister Narendra Modi from his hometown Vadnagar, Ravi’s statement said, adding that the information is also used on the CM Dashboard.

Ravi added that the ImTeCHO app was used for “door-to-door surveillance… after COVID-19 pandemic struck and was also used to monitor treatment”. “… in the first week of April when the Central government launched a mobile app for the treatment and observation of COVID-19 patients and when governments were directed to use it, instead of TeCHO, the decision was taken at our level to use the Indian government’s app”.

As of April 21, according to a Gujarat government press release, 3,304 doctors were registered on DrTeCHO+ application.

Dr Kamlesh Saini, state secretary of the Gujarat chapter of the Indian Medical Association, said doctors were expected to enter details such as name, age, phone number, residential address, travel history, co-morbidities or existing health conditions of SARI or ILI cases, as well as the symptoms being exhibited and since when.