As the Indian Air Force jets hover over Leh, capital city of newly created Union territory Ladakh, there is deafening silence on the ground in the cold desert. Amid the roar of fighter jets and unprecedented security build up in Ladakh, the police are not allowing anyone to move in the streets of Leh citing COVID-19 restrictions. There has been a steep rise in coronavirus cases in Ladakh over the past one week, forcing the government to resume the lockdown. However, the border tension following deadly clashes between Indian and Chinese soldiers on June 9 looks more worrisome than the pandemic.

“China carries out aggressive acts every year, but they have crossed all limits this time,” says a shopkeeper in the main market of Leh. Many politicians in the city argue that the Chinese will not stop here if they are not pushed back. “They have taken our cultivated land, our grazing land, and if they are not stopped, it is not going to end,” warns Rigzin Spalbar, former chairman of the Ladakh Hill Development Council. Ladakh MP Jamyang Tsering Namgyal asks, “If we know ‘Azad Jammu Kashmir’ as Pakistan-occupied Kashmir (PoK), why not to call Aksai Chin ‘China-occupied Aksai Chin’?”

In contrast to the silence on the roads in Ladakh, there has been no pause in the almost-daily encounters in the Kashmir valley, leading to the killings of young militants, some of whom took up arms barely a month ago or even later. When the government snaps the internet connection in a district, people there come to know that encounters are about to take place. These days, the internet is shut down almost every morning in the south Kashmir districts of Shopian, Kulgam and Pulwama. On June 21, internet connection was snapped and three militants—all new recruits—were killed in the heart of Srinagar’s old city, taking the total number of militants slain this year to 106. Over 70 of them were killed during the COVID-19 lockdown. After the June 21 encounter, the police claimed to have recovered an AK-47 rifle and two pistols.

Many here believe that regardless of how the situation plays out on the LAC, it will have an impact on Kashmir and counter-insurgency operations. When former CM Omar Abdullah tweeted asking people not to look towards Beijing and cited the plight of the Uyghurs in China, he faced such a backlash that he deactivated his Twitter account. “There was rage against Omar as he didn’t gauge the mood in Kashmir,” says a member of a mainstream political party. “With the BJP government working for demographic change in J&K by enacting law after law, you cannot browbeat Kashmiris by brining up the Uyghurs. India’s Kashmir record is so terrible and inhumane that even citing the Uyghur example is seen as an affront here and Omar realised it within half an hour of his comment.” 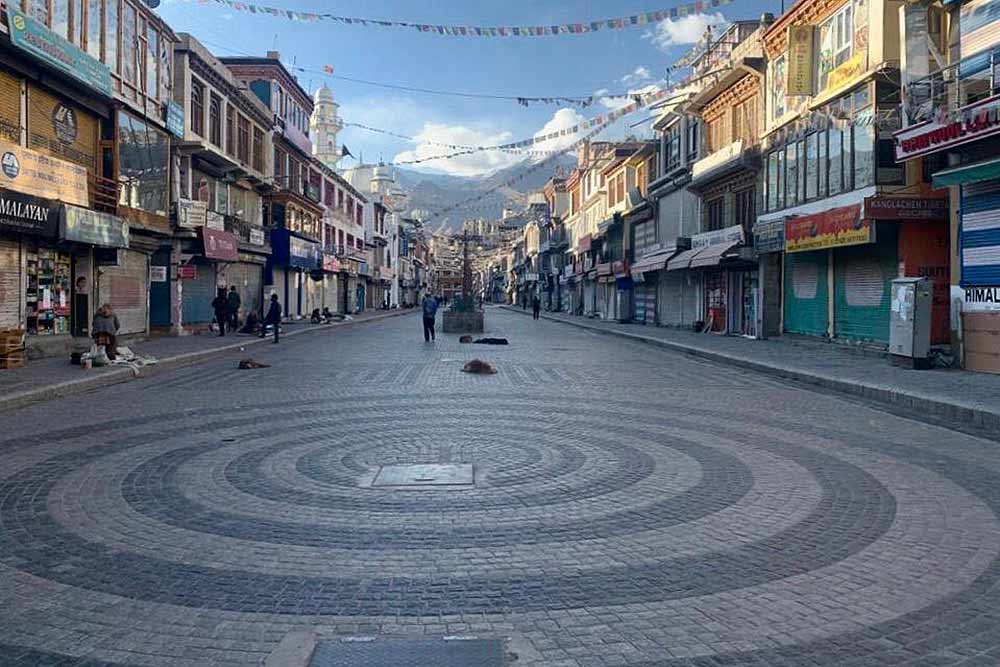 Police, however, see social media as a challenge. “The major threat and challenge is from the radicalisation and instigation of people through social media. We can call it ‘virtual militancy’,” says Inspector General of Police Vijay Kumar. “In December 2019, at least 252 militants were active in Kashmir, and now the number has come down to 100-200. The police don’t go by numbers; it is their job to kill militants wherever they get a lead about their presence.”

Nearly half (51) of the militants killed this year were from Hizbul Mujahideen. Since the killing of Hizbul’s longest-serving operational commander, Riyaz Naikoo, on May 6 in Beighpora village of Pulwama, the largest Pakistan-backed insurgent organisation in Kashmir has been taking a hit almost every day. On May 20, Hizbul divisional commander Junaid Sehraie—son of Tehreek-e-Hurriyat chief Mohammed Ashraf Sehraie—was killed in Fateh Kadal area of Srinagar along with other two militants. Nineteen houses were burned down during the operation and three civilians, including a child, died when a shell left behind at the site exploded later.

ALSO READ: Pangong Tso Lake: Why It’s A Sore Finger In Relationship Between India And China

“It is true that the Hizbul is bearing the brunt of the ongoing counter-insurgency operations,” says a senior police officer based in south Kashmir. “And it looks like the organisation is facing a shortage of weapons too. In some encounters, only pistols are recovered. In others, only one gun is recovered from three or four slain militants. The absence of civilian protests and civilian killings during the encounters this year also marks them as different from previous ones.”

“India’s Kashmir record is so terrible that even citing the Uyghur example is seen as an affront and Omar Abdullah rea­lised it within half an hour,” says a politician.

According to the officer, Jaish-e-Mohammed and the newly formed The Resistance Front (TRF) now pose the biggest challenge to government forces. “The number of foreign militants killed this year is less than before. When a foreign militant from Jaish escapes during an operation and leaves behind a US-made M-4 carbine, you realise where the real challenge comes from. Emergence of the TRF is another signal that foreign militants are now going to take centre stage,” he adds.

IGP Kumar, however, says he doesn’t see any difference among various militant groups as all of them work together in Kashmir. According to official figures, around 50 locals have joined militancy so far this year—145 had joined in 2019 and 220 in 2018. Instead of handing over the bodies of militants to their families, government forces are taking them to Baramulla or Sonmarg in north Kashmir for quiet burials. Relatives of militants often visit the graveyards in Sonmarg and Baramulla to look for the graves of their kin. How this emotionally sensitive issue plays out in future has to be seen. Analysts in Kashmir believe the killing of militants won’t wipe out militancy from the region, and that the present situation only indicates government forces have an upper hand at the moment.

While all eyes on the Line of Actual Control (LAC) in Ladakh, the Line of Control (LoC) between India and Pakistan in Jammu and Kashmir has been witnessing intense shelling for the past few weeks. An Indian soldier was killed on the morning of June 22 as the armies of India and Pakistan exchanged heavy fire in the Nowshera sector of Rajouri district in Jammu. A couple of days earlier, five civilians had been wounded due to shelling at a village in the strategic Haji Peer sector in north Kashmir’s Uri, around 100 km north of Srinagar. Earlier in June, at least six civilians had been injured and over a dozen houses damaged at Nambla village of Uri. “One of the shells fell near the Uri police station,” says a Uri resident. Sources say intense shelling is taking place in areas along the LoC where it had not been reported earlier. In PoK, journalists have reported five deaths in the past week due to cross-LoC shelling.

Opinion | The Crude Reality: India, China Should Unite To Throttle The OPEC Cartel

By Naseer Ganai in Srinagar