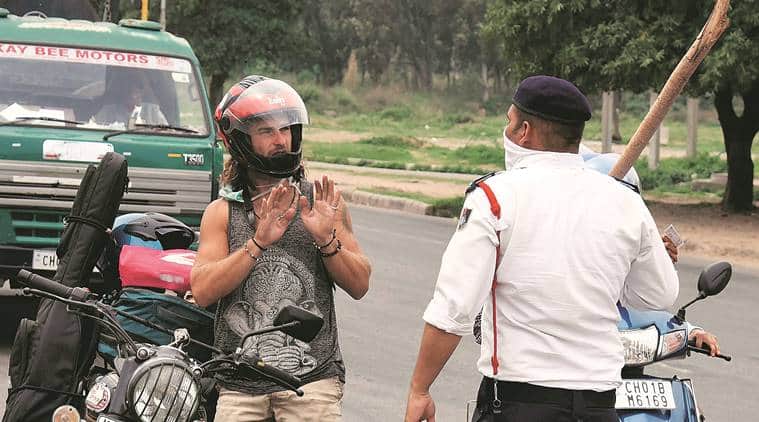 However, present face of Chandigarh police is in complete contrast to intial days of lockdown when Police personnel were out with batons in their hands to enforce law and order. (Representational)

When the lockdown was announced on March 24, Chandigarh Police personnel were out with batons in their hands to enforce law and order. They dealt with everyone sternly, using a heavy hand.

A video clip of eight men doing sit-ups before a woman police officer near Mani Majra went viral for at least three days. Another image was of a cop who had raised his stick to hit while talking to a foreigner at the Housing Board light point. A few of these images also featured in newspapers.

The other day, video clip of SHO Jaspal Singh went viral on social media while he delivered birthday cake at the doorstep of a 15-year-old boy in Sector 11. DGP Sanjay Baniwal appealed to residents, especially senior citizens and women, to dial 112 in case they needed any essential items. A dedicated psychologist for people feeling depressed and lonely was made available for nine hours at the Chandigarh Police control room every day. At least 6,000 senior citizens called up 112 seeking assistance for various reasons after March 24.

This outreach of Chandigarh Police has impressed even the most vocal critics of the khaki.

Advocate HC Arora, a crusader against police atrocities, says, “It is the need of the hour. COVID-19 is a global crisis. All the departments are bound to serve the public. But the outreach of police personnel has impressed everyone. I hope the cops stay this way till the crisis is resolved. They should be strict only with people who violate rules.”

RTI activist R K Garg, who keeps Chandigarh Police on their toes with his RTI applications, says, “From providing essential things to elderly people to maintaining law and order in the hotspots — they are doing a fabulous job. Cops along with doctors and sanitation workers are most vulnerable. I suggest that instead of exposing themselves by distributing food, cops should confine themselves to their routine duties. The administration should take care of the cops posted in hotspots and containment areas. There should be dedicated places for cops, where they can stay and clean their clothes, like para-medical staff members.”

DGP Sanjay Baniwal says, “Chandigarh Police is always there for citizens. The number 112 was not introduced after the outbreak. It was there for a long time. Earlier too, my men visited senior citizens, listened to them and provided them with all the things they needed. Now their work is being highlighted. It is part of our duty. There is a crisis all over. We have to assist the people by going out of our way. I am committed to providing all necessary protection to my men deputed in the frontline.”