How do you trace the outlines of pain on a gigantic, subcontinental scale…a cartography of pain, if you like? Take as your sketching ink some extremes of the human condition. As it happens, it’s available in plenty in the real world. The basic facts will do. On May 23, a 48-year-old migrant labourer died on the Shramik Express—minutes before the train from Mumbai pulled into the last station, Varanasi. A fabled last station, civilisationally. But why did Jokhan Yadav die? First, there was the heat. Then, he had gone without food or water for over 60 hours, as he moved over the northern Indian plains, like lakhs of others, trying to reach his hometown Jaunpur. No food or water was served on the train during the entire journey. And stick-wielding GRP personnel wouldn’t let anybody get down from the train. It thus became, in a perversion of how it was intended, a moving concentration camp.

Now take such a picture and paint it again and again, or photocopy it a few million times for efficiency. Then we can begin to fathom pain that comes in the size of a country. Of course, given the swiftness with which agony is being cast as heroism, Jokhan too may have been hailed as an icon of endurance, if he had survived. For, trauma is also felt by the classes that have occasion to consume this explosion of dismal news along with their takeway food, delivered by gloved hands, and Dalgona coffee—and still have appetite left over for messianic signs of heroism. Only the softest nudge is required. Ask Jyoti Kumari, the 15-year-old who cycled 1,200 km from the parody spires and glass boxes of Gurgaon to her real world—Darbhanga in Bihar—with her ailing father on the pillion. The Cycling Federation of India offered her a trial! The girl refused the offer citing the primacy of her studies. What can connect the pain in her limbs, the unrequited hero fetish of Indians who can afford to stay locked down, and the sparse economy of north Bihar that her family had fled in the first place? What brand of sociology can unpack the paradoxes?

Something must. For, now we have an embarrassment of riches in terms of samples. India has turned into a giant lab of extreme sociology ever since the lockdown happened: lakhs of labourers in the cities made a dash for their homes, often hundreds of miles away. Braving—not braving, suffering—heat, hunger and the assault of police batons. On foot, on cycles, on rickety rickshaws, often crossing forests and rivers. At least a hundred died in accidents, run over by trains, hit by speeding trucks, or when their vehicles overturned. Some succumbed to sheer exhaustion—in all the glory of the Indian summer. 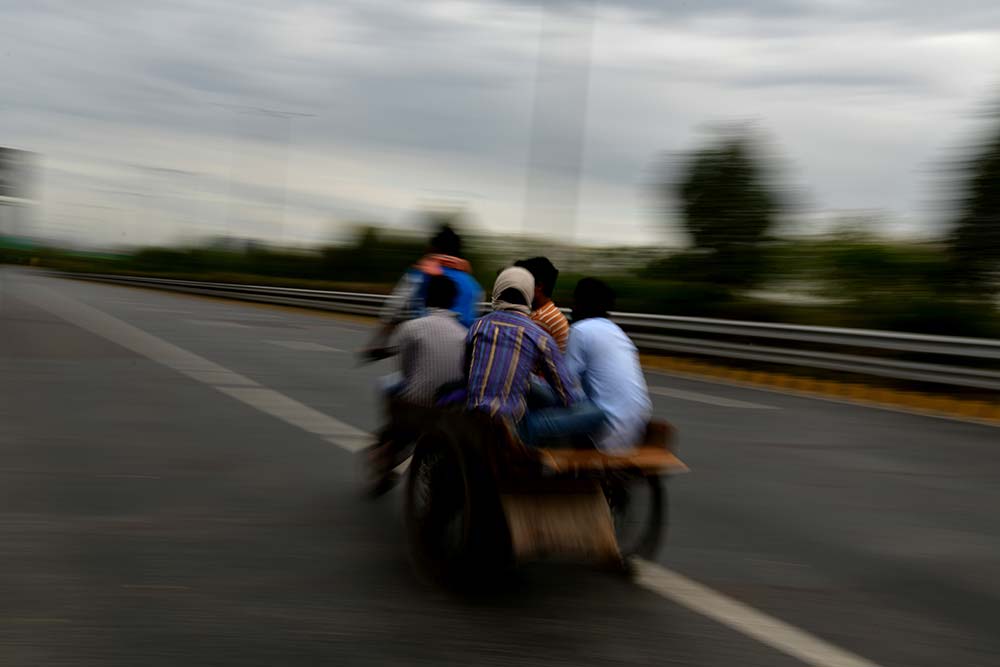 Amrit Kumar, all of 25, suffered a heat stroke while travelling on the back of a truck, from Ahmedabad to his native village in UP’s Basti. His friend from the village, Mohammed Saiyub, got down with him midway and took him to a hospital, but the severe dehydration proved fatal. Other passengers had urged Saiyub to leave the friend. In a sane society, this would have been a story of hardy friendship, but in our minefield of a society, it attained the semantics of religious amity. Amrit, ironically named in retrospect, leaves behind those who had conferred that name on him: his not-so-able-bodied father and mother, besides four younger siblings.

Among those millions in Brownian motion, there were those who made it home and those who could not. There was a third kind too: the likes of Saiyub, who reached home but marked by such deep loss that the torment of the journey paled in comparison. Ram Pukar Pandit, whose weeping face bec­ame a symbol of migrant misery, reached home but could not see his year-old son even in  death—he hadn’t seen the child in life either. The little body was flown down the waters of the Budhi Gandak by the time he reached.

ALSO READ:  Opinion | Covid-19 Has Exposed The Raw Nerves In Indian Society And Culture Of Doublespeak

The loss and the voiding will be evened in the fullness of time. For now, they, and their compatriots in suffering, have reached the villages where they feel safe, and protected, and as Egyptian writer Naguib Mahfouz noted, where all their attempts to escape cease. Out of four crore migrant labourers, 75 lakh have returned homes, we were informed last week. For those who have crossed the hump, questions of more earthly character loom large. What will they do in their villages and towns, the very places they left for reasons of want?

They have the promise of an infinitely basic meal at home, but their needs will mutate. The lockdown might lift soon, at least partially, but will those scarred by this summer ever return? At the other end, the comfort and cushion of home might wear out soon too, and the limitations of the village economy might start gnawing at them. For some, it could be a question of if, but for most, it’s a question of when. They are merely waiting for an opening. 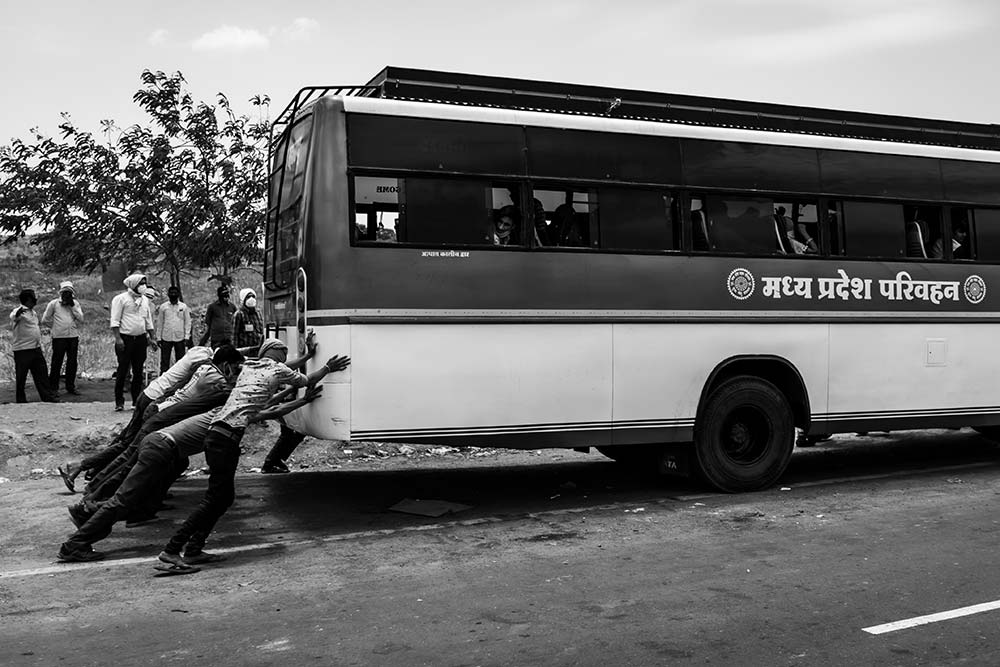 Why? Avinash Kumar, assistant professor at JNU’s Centre for Informal Sector and Labour Studies, takes us back to the basic driver of migration: the local economy, deficient and unequally distributed, is unable to sustain its working population. “They are forced to go out and work. There’s also social mobility: better job, better education, better quality of life. So there’s forced mig­ration as well as that driven by a pull.” Mostly, he says, it’s the landless and small and marginal farmers who migrate to cities. “Within those classes, we see people from all castes moving. The more privileged castes, however, have a greater degree of choice in work because of their social capital. You won’t usually find a savarna carrying bricks at a construction site. You are more likely to find them working as security guards,” says the professor.

Back in the village, one new variable is NREGA: the numbers opting for work under the social security scheme are quite telling. As a basic safety net, it guarantees 100 days of work and a daily maximum wage of Rs 220 to every person in a village. In 50 days beginning April 1, NREGA received applications from 35 lakh new workers across India. Compare with financial year 2019-20: in all its 365 days, there were only 15 lakh new applicants.

The figures are, in a real sense, a statement on the terrible paucity of work options in rural India. It’s not only the returnees, even locals who are out of work because of the lockdown are opting for it. Two weeks ago, the Centre pumped in Rs 40,000 crore to strengthen NREGA, in addition to the exi­sting budget of Rs 61,000 crore. In the usual scheme of things, NREGA is often seen only as a means of supplementary income and a viable opt­ion for women who can’t go out of the village for work for a number of reasons. It didn’t stand up for contest as a primary option because a) the wages are considerably low as compared to city wages, and b) it gives only 100 days of work whereas cities offer plentiful, if irregular, work throughout the year. But in this Covid-bitten season, it has become an option of the last resort.

Rajasthan has the highest number of NREGA workers at the moment: 40.3 lakh, as of May 26. In the first week of March, that stood at only 10 lakh, then fell further to 62,000 by mid-April. That was because guidelines weren’t clear on NREGA during the first lockdown (March 25-April 14), which res­ulted in low labour engagement.

But the second lockdown guidelines made it very clear that NREGA work could be opened in non-containment zones. “The numbers have soared since then,” says Purna Chandra Kishan, NREGA commissioner, Rajasthan. He attributes Rajasthan’s top rank in enrolment—despite having only 1.07 crore job cards—to better implementation. UP, on the other hand, has 1.83 crore job cards but lags behind in the numbers enrolled. “Of the 10-11 lakh labourers who have returned to Rajasthan, 7-8 lakh are already working under NREGA,” says Kishan.

The scheme’s success in Rajasthan could also be ascribed to the state being the karmabhoomi of the Mazdoor Kisan Shakti Sangathan (MKSS), a people’s organisation that spearheaded the campaign for NREGA legislation. Aruna Roy, one of its oldest members, had in an interview to Outlook earlier this month suggested that the government needs to ensure a minimal level of livelihood and income security to labour, farmers and workers in the informal sector, and that NREGA was an obvious tool for it. “There is no alt­ernative to ensuring a regular cash flow to all those affected. The Employment Guarantee Act would provide work with dignity, and perhaps be the most inexpensive way to rebuild a shattered economy,” she said. Roy had also put forward ano­ther interesting idea. “…an Urban Employ­ment Guarantee should also be put in place. The shock of the lockdown, and the loss of employment, will be countered only with guaranteed tenure and security of income to help persuade workers to return to their former places of work,” she said.

Returning also means forgetting the injustices. Being sprayed with chemicals, being cooped up for days without even food in ad-hoc quarantine centres and errant trains—indeed, their trains being cancelled by chief ministers when wealthy realtors wanted plentiful ‘supply’ of labour. But when have they not forgotten—or should we use the moral word, ‘forgiven’? Many are not even angry with the government; their sense of rights and citizenship too have been economised by the economy of their resources. That’s the other paradox. Are the ordinary days in the lives of a migrant worker significantly better than these days of lockdown? Their years have been filled with the hardest living—the naturalness with which they responded to the crisis, millions opting to walk and cycle for hundreds of miles, speaks of familiarity with physical extremes. Enduring injustice too was perhaps a way of life for them. It was only the accumulated mass of it that made it visible to the privileged classes. Often, the shock and outrage belongs there. As does any sense of the collective betrayal of rights.

650km Mukesh Maurya,22, a daily wage labourer, travelled from Delhi to reach Musafirkhana, his village in UP’s Amethi district, 650 km away. He set off on March 28, determined to be home to see his baby being born. It took many hours of walking, more hours of waiting and three gruelling, crowded bus rides. “I reached just in time. My wife was in labour and we had to get an ambulance to take her to hospital,” Maurya said.

100km Migrant labourer Jatin Ram’s pregnant wife, Bindia, who walked over 100 km from Ludhiana, delivered a girl child after reaching Ambala in Haryana on May 23. But the baby died shortly after birth. It was the first child of the couple in their early 20s. They were on the way home in Bihar.