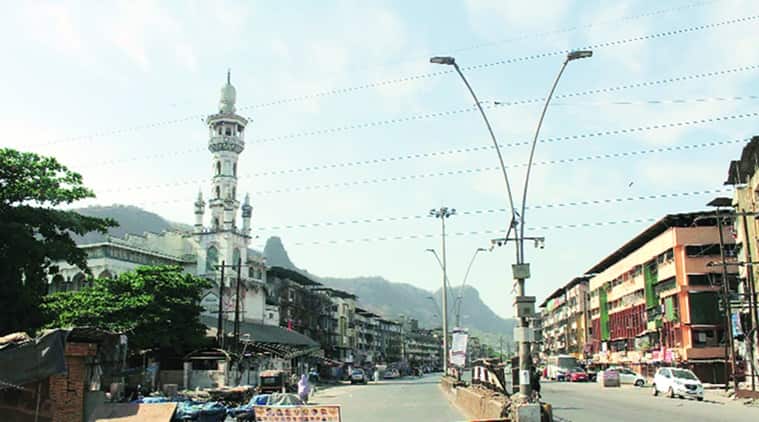 A deserted street in Mumbra on Sunday. (Photo by Deepak Joshi)

The mingling fragrances of haleem and kebabs with the sweaty press of bodies are missing, as are the hundreds of autorickshaws honking alongside street vendors’ raucous cries. Densely populated Mumbra, 40 km north of Mumbai, may have more people on the roads than most parts of the financial capital even during a lockdown, but an unprecedented hush marks the start of Ramzan in this satellite town, ghetto and now a COVID-19 hotspot.

According to data from the Thane Municipal Corporation (TMC), its Mumbra Prabhag Samiti accounts for 41 cases, the largest chunk of Thane city’s 209. Thane district, with its other towns such as Kalyan, Dombivali, Ambernath, Badlapur and the tribal-dominated talukas of Wada and Jawhar, has over 450 positive cases too.

In Mumbra, where local member of the Legislative Assembly and Minster Jitendra Awhad has himself tested positive as have top police officers, the municipality is struggling to enforce social distancing and lockdown norms. A central team headed by Additional Secretary Manoj Joshi arrived in Thane on Saturday, and apart from hospitals in Thane city, visited Amrut Nagar and Parsik Nagar in Mumbra, both containment areas.

Unknown to them, a wide ranging and substantive change has occurred this Ramzan — amid the lockdown, there is an explosion of charity in this dormitory town for its migrant workers, daily wagers, out-of-work vendors, autorickshaw drivers and others.

“The month of Ramzaan is a time to feel others’ problems, and I don’t think that there can be the usual fervour of Ramzan in Mumbra even if the lockdown ends. People can see that their neighbours don’t have even the basics, then how can we celebrate or cherish Ramzan?” asked Mohammed Javed Shaikh, Mumbra coordinator of the Jamaat-e-Islami Hind (JIH), which started raising funds and feeding the poor from March 24. “Many, many people in Mumbra have resolved not to buy new things for Eid, and to spend that sum in charity instead.”

The JIH is currently providing meals to 2,200 people, and has introduced meat and eggs to its late night food supply so that the pre-dawn meal before the fast begins is packed with nutrients.

For nearly 15 years, the offering of dates, Roohafza and fruits to anyone who alighted from local trains was a unique Mumbra custom, a little something to help people break their fast on time. The same gesture was extended to those boarding buses outside the railway station as well.

Local corporator Yasin Qureshi, who had started this practice along with his friends, said, “As the trains are shut this year, we are not distributing dates and roohafza. Instead, since April 15, volunteers have visited various lanes, mosques and societies to draw up lists of people who need food. We give them a time and place to collect the groceries.” The grocery package contains dates, rice, flour, oil and other items for Iftaari.

Since Saturday, Mumbra Prabhag Samiti also changed shop and market timings, allowing shops and bakeries to be open from 3 am to 12 noon, to help residents buy food in time for the pre-dawn meal.

The JIH donated packages of groceries too. “There are people who live in flats, relatively well-off but actually in acute need of help this year because small traders, those working minor jobs in Mumbai, daily wagers, the bulk of Mumbra’s population has no income. In some cases, we were advised to leave relief material in the building premises so that whoever is in need can come and pick it up without embarrassment,” Shaikh said.

Across the road from the crowded Amrut Nagar street, little Samir is selling grapes, pre-weighed and packed in clear plastic bags. It’s 10 am, and the 12-year-old is sleepy.

“I’ve been here since Suhoor,” he said, using the term used commonly in the Middle East to describe the morning meal.

Mumbra was little more than a village in the 1980s, its population growing to about 45,000 until 1992-1993 when tens of thousands of Muslims fleeing riot-torn Mumbai relocated here. The township’s population is now estimated at 9 lakh, including 2 lakh migrants. The living arrangements are for the most part dank, crumbling buildings lined up along the 5-km main road and the streets and alleys branching off from it. Modern apartment complexes with elevators and views of the Parsik hills stand at the farthest end of the main road.

Kausar Ansari of Awaaz-e-Niswan, a women’s rights group based in Mumbra, said the twin problems of joblessness due to the lockdown and troubles accessing subsidised foodgrain are widespread. “Families without ration cards are very common here. And though we have been talking to the authorities and advising people to try to get foodgrain from the fair price shops using old cards or photocopies, the public distribution system (PDS) has left out lakhs of needy families here,” she said. Also, only rice has been available through the PDS, the promised dal stocks have not yet arrived. The problem of shortage of common medicines at the chemist shops also continues.

There are nearly 300 small and large masjids in Mumbra, and all have altered their Azaan to ask the faithful to pray at home, followed by announcements about staying at home. Religious institutions are also spending funds raised through charity on feeding the poor.

Normally, restaurants such as Cafe Tuba would sell chicken cutlets, malpua, rolls and kheema samosas from stands outside the restaurant during Ramzan evenings, drawing crowds of people out for ‘Iftaari shopping’. Handcarts would sell items such as rolls at lower prices.

Haroon Shaikh, a local resident, said: “During Ramzan, Mumbra is bustling with crowds, especially in the evening. Also, after the 15th fast, stalls selling cloths come up. By the last week of Ramzan, these shops stay open till Sehri time as people are out buying clothes and jewellery to wear for Eid.”

All of that is missing, and all those who depended on that business have run into deep financial distress. “Many organisations and individuals have come forward to offer financial aid and food to those going hungry,” said Ansari. Shaikh said it’s as if people have found meaning and purpose amid the crisis, despite the widespread unhappiness about communal messaging rampant on social media. “Charity is a central part of the religion, and people have taken it very positively during this crisis.”