Artist Zarina Hashmi passes away at 83 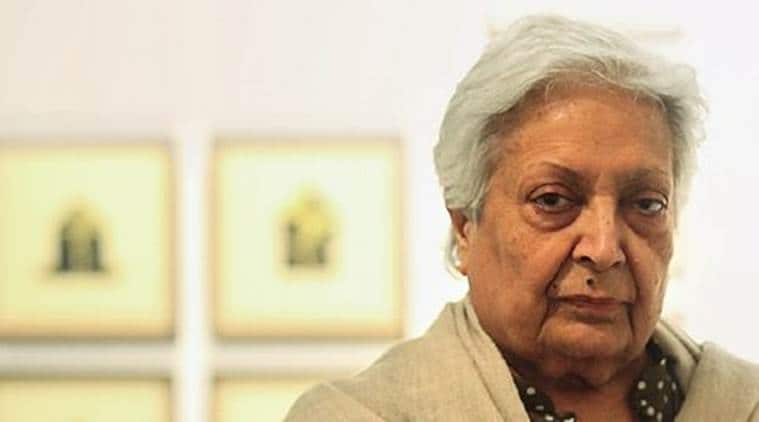 The journey came to an end on April 25, when she passed away in London, at 83, after a prolonged illness. (Photo: File)

The humble and enigmatic lines took innumerable forms in Zarina Hashmi’s works – at times they appeared as political borders, on other occasions they exemplified her interest in architecture. They were jagged veins that denoted vague and distinct memories that the artist gathered from experiences and interactions with people and places across the world. Hashmi lived in numerous cities, from Aligarh to Bangkok, Paris, New York and London, and in every place, she sought to create a home. The journey came to an end on April 25, when she passed away in London, at 83, after a prolonged illness.

“Her work was an extension of herself. It had the simplicity of lines and minimalism but was rooted in Indian aesthetics and also political,” says Renu Modi, director of Gallery Espace in Delhi, that has represented her for over two decades.

A graduate in mathematics, with a keen interest in architecture and part of the feminist movement in New York in the ’70s. (Photo: Gallery Espace)

Daughter of a professor at Aligarh Muslim University (AMU), Hashmi was 10 when the Partition took place and was witness to the subsequent communal violence. Though her family relocated to Karachi in the late ’50s, the artist by then had married and later travelled with her diplomat husband during his various postings. A graduate in mathematics, with a keen interest in architecture and part of the feminist movement in New York in the ’70s, Hashmi’s art training was rather unconventional and included her learnings from interactions with papermakers during her visit to Rajasthan in the ’60s, studying printmaking with Stanley William Hayter at Atelier 17 in Paris and woodblock printing at Toshi Yoshida Studio in Tokyo. 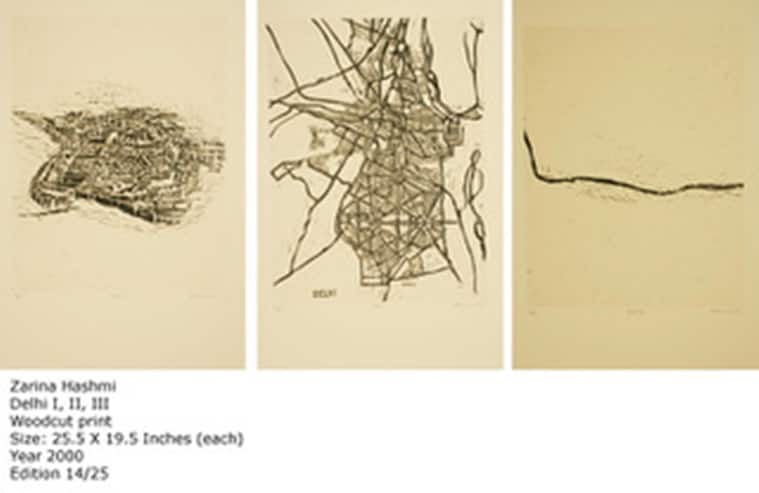 Winner of numerous awards her works is in prestigious collections including the Museum of Modern Art in New York and Victoria and Albert Museum in London. (Photo: Gallery Espace)

Like the places she lived in, her work too gave her refuge. If the 1997 series ‘Homes I Made/A Life in Nine Lines’ featured rough floor plans of the homes she lived in, ‘Home Is a Foreign Place’ in 1999 was an abstract representation of her home in Aligarh. The 2004 work ‘Letters from Home’ was based on unposted letters written by her sister Rani to her, and shared years later — the woodblock and metal cuts prints featured maps, floorplans, and Urdu text that also formed an integral part of Hashmi’s practice. “She was a modern, secular and fiercely independent woman. In Delhi, she learnt to fly and was a member of the gliding club, a lot of her map work is related to that experience… There was a minimalist streak in her. She had a refined sensibility of aesthetic and philosophy. A great fan of world cinema, she also read a lot, including philosophy in French, Urdu literature and poetry,” says photographer and activist Ram Rahman, a close friend of Hashmi.

The title of her 2013 solo at Guggenheim Museum, ‘Zarina: Paper Like Skin’ exemplified her relationship with the medium. Hashmi explored its numerous textures, including pin drawings, etchings and caste paper sculptures. Though she lived in New York for over four decades, from the ’70s, her works travelled the world. Winner of numerous awards, including the 1969 President’s Award for Printmaking in India, her works is in prestigious collections including the Museum of Modern Art in New York and Victoria and Albert Museum in London. In 2011, she was one of the artists who represented India at the Venice Biennale. “She said she didn’t feel at home anywhere. She was always searching for what is home, identity. That search never finished,” says Modi.

For all the latest Lifestyle News, download Indian Express App.